Bill Trefethen is not Greek, but he has big ideas for Daphne's Greek Café.

As the new chief executive officer for the Greek food chain, Trefethen wants to revamp the company in hopes of satisfying loyal customers and bringing in new ones. Over the next few months, diners can expect to see some big changes at the casual dining restaurants.

"We did a lot of soul searching and research into who our core customers are," Trefethen said. "We've come to the conclusion that we're going to stay Greek, but we're going to become our own brand of Greek."

Daphne's, formerly owned by Fili Enterprises Inc., filed for bankruptcy in January. Founder George Katakalidis insisted the restaurants would stay open and the move was only to restructure the company's debt. But after protracted proceedings with Bank of America, Katakalidis finally decided to sell to Trefethen's investing firm Trefethen Partners in August.

Trefethen has been involved in acquisitions for years, and has worked in the retail and restaurant space since the late 1990s. He said he saw a lot of untapped potential in Daphne's.

"We buy debt in a lot of companies and I don't usually come in and become CEO," he said. "I really liked the concept (of Daphne's) and I think it has a lot of upside and appeal on a national level if we tweak it a little."

Trefethen said he doesn't want to change Daphne's menu so much as the décor and the way the food is presented. While there may be some new menu items and alterations to old staples, the new owners are more concerned with taking the sometimes cafeteria style look of the restaurants and making them a destination where families might come to eat dinner, or where friends might meet for a weekly lunch. 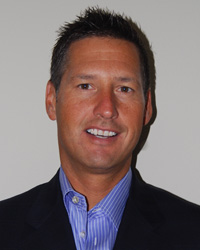 Bill Trefethen is the new CEO for Daphne's Greek Café.

To do this, the new owner plans to completely revamp the restaurants' interior, with new floors, ceilings, tables, chairs and flatware. He wants liquor licenses for all Daphne's locations so they can serve wine and beer. All stores used to have licenses, but some let them lapse because they weren't selling enough. The lighting at Daphne's will dim at night to welcome more dinner customers, and the music will be more contemporary pop, rather than traditional Greek.

There also is a plan to move toward environmentally friendly products, since research has shown Daphne's clients support this.

The food at Daphne's is already a selling point, Trefethen said. It's healthy for a fast casual restaurant, and with a new law requiring calorie counts at California restaurants next year, that becomes more and more important. Trefethen said when people see the calories in a Daphne's grilled chicken kabob versus a burrito at Chipotle, they'll choose the Greek café. The company plans to add items like whole-wheat pita bread for even healthier options.

"Where else can you go for healthy fast food right now, besides Subway?" Trefethen asked.

The food may change a bit, going more generic Mediterranean than strictly Greek. Trefethen said he thinks that as a person of Greek decent, the former owner Katakalidis may have been afraid to change the menu too much. Trefethen doesn't have that problem. Though he said he has reached out to the local Greek community since taking over Daphne's and they have been supportive of revamping the restaurant, even if it means somewhat diminishing its Greek roots.

"It's going to have more of a Southern California infused vibe," he said.

With 59 locations, mostly in San Diego, Orange and Los Angeles counties, it will take some time before the changes are seen in every Daphne's, but Trefethen said he wants to get renovations under way in some places in the early part of the first quarter. He hopes to have everything complete within two years.

Fifteen Daphne's locations were closed after Trefethen took over, but he said they are still saving thousands of jobs by keeping most locations open and, hopefully, revamping them for more success.

Ultimately, Trefethen said he'd like the take the chain nationwide and to a more classic franchising model.

I have been a customer of Daphne's since they first opened. The consistent attraction is the food and reasonable prices. Upgrading the interiors may help but don't change the delicious food.

Daphne's has the best fiery feta, gyros, and chicken kabobs. I love eating there because of the many healthy options -- their Lite salad dressing is the perfect touch to their fantastic salads.

I'm glad to hear about the positive outlook the new CEO has for Daphne's! My family and I love the healthy food at Daphne's and the pleasant service. With the planned changes it should be even better. The idea of adding wine and beer to share with the food is an excellent idea.