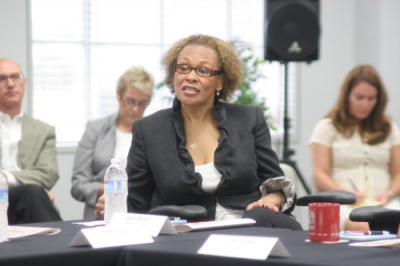 While women have made great strides in the legal community throughout the years, some barriers still remain, according to a panel of female attorneys recently hosted by The Daily Transcript and sponsored by Union Bank.

Women continue to lag behind their male counterparts in partnership appointments and management positions as certain gender-based stereotypes persist.

“Picking a jury is a surefire way to be reminded that there does still exist an amount of prejudice against women lawyers,” said Wendy Patrick, a deputy district attorney in San Diego County. “Not necessarily by the judge; not necessarily by opposing counsel; but by the folks that are going to be deciding your case.”

And even though three women now sit on the U.S. Supreme Court, a woman is chief justice of the California Supreme Court and two of San Diego’s top prosecutors are female, a glass ceiling still exists, the panel agreed.

“I think we’ve come very, very far, but to say that it’s eliminated – there’s no glass ceiling – I don’t see how anyone could say that,” said Heather Rosing, a shareholder and chief financial officer of Klinedinst. “The statistics bear it out.”

While the area’s legal profession consists of approximately 50 percent women, the Lawyers Club of San Diego’s most recent gender bias survey indicates a gap exists between the number of male and female partners.

Part of it is a reflection of society, according to Lisa Martens, a principal in the San Diego office of Fish & Richardson.

“I feel our country, as far as we’ve come, we still have a long way to go in a lot of areas far beyond the legal field,” she said.

One of the reasons why there aren’t as many female partners is by choice. Some women decide they don’t want to put in the hours required of a partner, choosing instead to spend more time with family. Others get creative and start their own firm, where they can practice on their own schedule.

“But women who elect to stay in the legal profession today face challenges with perception as they try to rise the ladder in the event they do have children,” said Rosing, herself eight months pregnant at the time of the discussion.

She noted, however, that the members of her firm, Klinedinst, have been very supportive.

Janice Brown, who founded and runs her own law firm, Brown Law Group, said women not only have to change other people’s perspectives, but they also have to change their own.

“The job is both an outside and an inside job, because we limit ourselves, I think, and that’s where the challenge is,” she said. “So what do we have to do – and think – differently to get what it is we want? And do we really want it?”

Progress has been made, however.

It is not uncommon for women with children to become partner. Law firms tend to be more accommodating now, according to Julie Mebane, a real estate partner with Duane Morris.

“When I was an associate, it was unheard of to be elevated to partner while you were working less than a full-time schedule,” she said. “That happens routinely now at large law firms. You have to be working hard – it can’t be a third of your normal schedule or a half – but as long as you’re showing a commitment to continuing your career, that happens in many large law firms now.”

Smaller firms can be even more flexible, according to Anne Rudolph, an associate at Hughes & Pizzuto. In her previous firm in Eureka, Calif., Rudolph became a partner within three years.

Kristan Shepard, an associate with the boutique trusts and estates law firm Goodwin Brown Gross & Lovelace, has had a positive experience with her male counterparts. All four of the partners in the seven-person firm are men.

“They have been fantastic,” she said. “They’ve encouraged growth and rainmaking from early on. They’ve always told me, ‘You’re not a potted plant. Go out there and show ’em what you can do.’ ”

Fish & Richardson’s Martens said she doesn’t see there being a real pay disparity between men and women these days.

Law firms usually have a compensation formula that involves the number of years out of law school, how much business you bring in and the amount of billable hours, regardless of gender.

But some subjective criteria can be used in determining who gets elected partner, according to Brown, and those factors can work against women.

Patrick, the deputy district attorney, agreed that certain traits are popular in the legal field.

“Let’s face it, we are in a profession where assertiveness, aggressiveness and advocacy is what wins cases, what gets clients (and) what builds credibility,” she said. “And it’s unfortunate that there are some people, who strive to be great trial lawyers, that for whatever reason don’t find these qualities to come naturally and need some mentoring.”

Klinedinst’s Rosing said that because of these perceptions, women litigators have to be careful with how they present themselves to a client or the court, making sure not to be too aggressive but not too soft-spoken either.

They have to think how to modulate their voice.

“Little things that men don’t have to think about,” she said.

“Throughout my career I have found it tremendously difficult to strike that balance,” Rosing said, “and I have seen other women struggle with that balance too.”

Brown said women can overcome some of the barriers they face by being confident and telling the truth when it comes to the contributions they make to the job.

“I feel a huge responsibility to talk to women all the time – and men too,” she said. “It’s an obligation to give back, to encourage, to support, to let people know that they’re stronger than they think they are.”