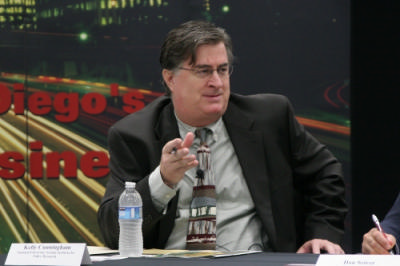 An economy plagued by uncertainty and lethargic growth isn’t without its bright spots, according to a panel of local economists, but that doesn’t mean there’s a great deal of room for optimism.

San Diego is adding jobs faster than the state and national averages right now and national consumption metrics belie the state of the broader economy, but uncertain regulatory and political environments continue to prohibit the sort of recovery for which the country’s beleaguered workforce is waiting, the panel said.

As part of an economic outlook-themed roundtable hosted by The Daily Transcript and sponsored by J.H. Cohn LLP, the panelists painted a picture of an economy looking for a footing that’s constantly being undermined by political gamesmanship on the national stage and the uninformed electorate that allows it to happen.

San Diego has created 13,000 jobs through the first eight months of the year, after creating only 5,200 in all of 2010, according to Lynn Reaser, chief economist at the Fermanian Business and Economic Institute at Point Loma Nazarene University. That’s a faster pace than the rest of the country, but still not fast enough to dent the county’s unemployment rate.

Alan Nevin, principal with London Group Realty Advisors, said the accounting of the unemployment rate systematically over represents joblessness in the county.

“Military personnel are not included -- and there’s 120,000 people in the military here -- and it also doesn’t include the 30,000 people who come over the border to perform jobs in the county each day,” he said. “Unemployment in San Diego is much lower than what’s published.”

Both Dan Seiver, professor in the finance department at San Diego State University, and Kelly Cunningham, economist and senior fellow at the National University System Institute for Policy Research, countered that the unemployment rate also discounts the underemployed and those who’ve either given up looking for work or who are working part-time jobs but would like full-time employment, which would at least mitigate the effect of those in the military and coming from Mexico who aren’t counted in San Diego’s jobless rate.

“Nationally it’s true that we’ve been creating something like 100,000 new jobs each month for a while, but that’s not enough to keep up with pop growth let alone to make a dent in the huge army of unemployed,” said James Hamilton, professor of economics at the University of California, San Diego. “As far as what it would take to make progress we’d really need above average growth of real GDP (Gross Domestic Product) and that’s what we haven’t been getting.”

Patrick O’Keefe, director of research at J.H. Cohn LLP, said he gauges the labor market based on the proportion of the work-eligible population that has jobs.

“That ratio, which is how many resources available without the denominator problem of whether they looked for a job in last 30 days, nationally that rate is at the lowest level it’s been since the early 1980s. If we took the average employment rate in five years prior to recession and compared to today, we have a jobs deficit that’s affecting 11.2 million people. That’s not full employment, just where we were prior to recession. Here in California, it’s affecting 2 million people that would have been employed in 2007.”

Recoveries following financial crisis are slow with subpar job growth, according to Reaser. Both private and public debt burdens need to be worked through before any period of above average growth can be experienced.

But retail sales, both nationally and locally, have actually been doing pretty well, Nevin said.

“You wouldn’t be able to draw a parallel line and our retail tax revenues,” he said.

The large increase in debt relative to incomes was the huge red flag in the run up to the crisis that too many economists missed, according to Hamilton, and that still has a ways to go before its back to normal historical ratios.

“That doesn’t go back to normal historical ratios if everyone goes back on a spending binge or a borrowing binge of money they don’t have,” he said.

He pointed out that there was a disturbing increase in economic pessimism this summer, much of which stemmed from Congress’ self-inflicted wounds over the deficit showdown.

“But there are also real problems and people aren’t imagining that and we need to deal with the problems, not pretend that they’re not there,” Hamilton said.

Within rising retail sales, there’s a secondary trend that should give observers pause, O’Keefe said. That is, there are a growing proportion of retail sales that are done through the Internet, with implications for both job creation and the real estate market.

“There’s an aggregate demand problem in terms of unemployment, but there’s also now a significant portion that’s composed of people with structural impediments to getting back in labor force,” said O’Keefe. “Right now policy makers are giving a lot of attention to the aggregate demand problem, and probably not enough attention to the structural impediments.”

Training programs or subsidies to employers from Washington, D.C. that would encourage people to bring these unemployed individuals on are needed to bridge the structural gap within the unemployment rate, according to O’Keefe.

Consumption has been too high of a percentage — near 17 percent — of GDP recently, a trend that’s unsustainable in the long run, according to Seiver.

“In the long run what we really need is for consumers to spend a little less and save a little more, but that’s going to hurt in the short run,” he said.

Reaser said the thrust of policy through the recovery has been that we want consumers to save more, we just don’t want them to do it right now.

“That’s a good description of our fiscal policy too,” O’Keefe joked.

In terms of the uncertainty presented by partisan squabbles on Capitol Hill, as well as the pending 2012 campaign season, Reaser said the timing of some upcoming events could throw off the economy.

Specifically, the “supercommittee” tasked with delivering a credible, bipartisan deficit reduction proposal is set to deliver its work on November 23 -- right at the start of holiday shopping season -- and Congress is set to give it an up or down vote a month later, just a few days before Christmas.

“That could reflate uncertainty if Congress says no, and there are immediate spending cuts put into effect,” she said.

Cunningham stressed that those automatic spending cuts could fall disproportionately on San Diego, which has more active duty military members than any other market in the country, and is in the top five in defense-related contractors.

“We’d get it from both sides if there are automatic cuts,” he said.

Hamilton then sought to dispel the notion that the nation’s fiscal problems are a crisis in the immediate term.

“Spending cuts and tax increases are contractionary in the short run,” he said. “Cut backs in state and local government employment have been an obvious drag in the employment numbers that we’ve seen recently.”

He stressed that the nation is faced instead with long-run challenges that require mature and open discussion.

“The thing that frustrates me about our political process is that we have everyone talking about cuts right now, which I don’t personally think is a good idea,” he said. “What we need is to agree on what we’re thinking of five to 10 years from now in terms of Medicare and entitlements, and what tax load are we going to have in the long run. That’s the debate we need to be having now. But talk of balancing the budget for 2012 ought to be off the table.”

Seiver followed up on Hamilton’s comment, placing blame for the lack of sophistication in the current economic and political dialogue on the nation’s professoriate for failing to sufficiently inform the American public.

“The problem is the American people are in my opinion ignorant on economics, among a number of other subjects,” he said. “We still seem to turn out college graduates who are easily swayed by simplistic, out-of-date, or foolish theories. The idea that if we don’t balance the budget now that there’s going to be some kind of Armageddon, that’s just wrong. Every serious economist knows that’s wrong. That’s contractionary. But a lot of Americans would say ‘Yes, we need to balance the budget now.’ Our political leaders ought not play to those irrational concerns. I’m willing to give myself an F along with other faculty that hasn’t done a good enough job educating the American people.”

“We probably need even bigger deficits now to jump start the economy, and then we need to deal with the long-run fiscal deficits and reduce those massively by attacking the big entitlements. But that’s more complicated, it’s not as simple as something like shouting “Get rid of the Fed,” which is another example of economic illiteracy,” Seiver said.

Part of that economic ignorance, according to Reaser, stems from the country’s failure to deal with the deficit in recent years, even when it was dealing with a surplus.

Pointing to the economic anger seen in the Occupy Wall Street movement and the Tea Party, O’Keefe said the general public intuitively knows something is wrong, even if it is not well informed on economic policy.

“It’s probably not their responsibility to define that we need a glide path instead of immediate action, being that there isn’t a glide path that’s workable,” he said. “The partisanship has gotten to the point that politicos can’t even discuss the need for middle ground. Half of Congress is saying you can’t raise taxes and the other half is saying you can’t raise spending, when any economist knows you need both, and it’s really about how we arrange it and time it. Our political leadership is failing at explaining how it can be done.”

Seiver and others agreed that unfocused thinking at the political extremes has complicated the discussion surrounding the nation’s fiscal crisis.