The 2011 Orchids & Onions awards ceremony began with Grant Barrett, a radio host and the evening’s Master of Ceremonies, informing the audience that the word “orchid” comes from the Greek word for “testicle.”

“So you could say the onion winners have a big pair of orchids for showing up,” Barrett said.

His joke set the tone for the ceremony, which both poked fun at and praised local pieces of architecture. Twenty buildings or projects were awarded either “orchids,” for laudable work, or “onions,” for creations that were noticeable, but not necessarily in a good way.

The awards were decided by six jurors, along with two “People’s Choice” awards.

Craft & Commerce, a New American-style restaurant situated on the southern end of Little Italy, won the jury’s favor with its design, courtesy of architect Paul Basile, and was proclaimed Grand Orchid. 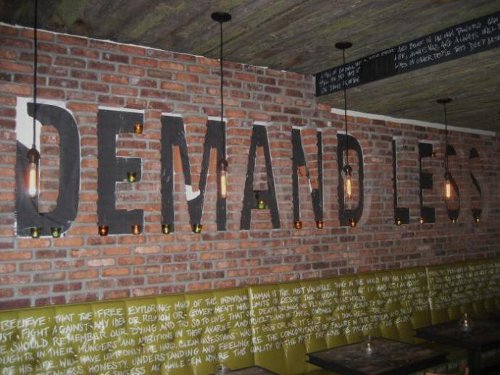 Dirk Sutro, a UC San Diego music professor, presented the award by describing the restaurant as a place where “space had transcended design.”

“It had the impetus to stimulate a sleepy corner into a stimulating destination,” he said, and added the restaurant is a “welcome and daring addition to San Diego’s landscape.”

As the four young owners of the restaurant took the podium to accept their award, one proclaimed, “This is pretty freaking huge.”

The Grand Onion went to Sherman Elementary School in the Sherman Heights neighborhood.

Barrett said the building served as an example of when “terrible architecture can come directly from design criteria and guidelines.”

“The school’s bell tower alone was enough alone to earn the onion,” he said.

The Fallbrook Branch Library was recognized as the People’s Choice Orchid. Ferguson Pape Baldwin Architects served as the architect of record, and Manuel Oncina Architects was the design architect.

County Supervisor Bill Horn accepted the award, saying it was a sign that “There is life north of Escondido.”

“The community loves this library, visits it, and it is one of the most used libraries in the County of San Diego,” he said.

On the other end of the spectrum, the inactivity along Pacific Highway was voted the People’s Choice Onion.

Because no one person was responsible for the lack of development along the highway, Barrett accepted the award “on behalf of people.”

The new downtown campus of the Thomas Jefferson School of Law was awarded an Orchid in landscape architecture, as was the David Kreitzer Lake Hodges Bicycle and Pedestrian Bridge near the San Diego-Escondido border.

Tony Sanchez, the bridge’s designer, said it was his favorite project in 20 years of work.

“Form follows function,” he said, and added the bridge held a world record for being the longest of its type.

In its second year as an Orchids & Onions category, the Orchid in sustainability went to Art Produce, a public art and culture center in North Park.

Elizabeth Studebaker, the former director of North Park Main Street, told the crowd to “stay tuned, because we’re just starting to develop North Park into the greenest main street in the nation.”

And owners of Meshuggah Shack took the stage in costumes, including a sequined shirt and afro wig, while blowing bubbles and dancing.

The State Street Offices and Harbor Point received Onions for less-than-admirable architecture, as did the Hillcrest LED sign for historic preservation.

Leland Hope, the Harbor Point architect, took the stage to accept his “award,” but said his decision to show up at the event was difficult.

He said his family has been practicing architecture in San Diego for a long time, and they are “0 and 3,” meaning the night’s award was their third Onion.

“A couple bitter comments, if I may,” he said.

Holden said the project was in a difficult spot a block away from the water and that its owner should “be applauded for taking on that property and letting me create excitement in an area that’s going to change because of what we built.”

He said the project is 90 percent leased and that “the community is great, everyone loves me, except for you guys.”

No one from State Street Offices was present to accept their award, leading Barrett to joke he would make salsa out of their onion- and garlic-decorated trophy.

“What do you do when the Architecture Foundation gives you onions?” he asked. “You make lemonade, or maybe salsa fresco.”

Nicholls added he accepted the award “with sincerity and agree to disagree with the association.”

“We believe our sign is fabulous, and that’s rooted in neighborhood enthusiasm and the tremendous feedback we’ve received, which lead us to believe we made the right choice for Hillcrest,” he said.

The event also included a tribute to local designer and developer Bob Sinclair from the architect Mark Steel.

“Everything you see in Center City and downtown has his mark on it, either directly or indirectly,” Steel said.

Leslee Schaffer, the executive director of the San Diego Architectural Foundation, took the stage to tell the audience there was an elephant in the room: Balboa Park’s Plaza de Panama, which was nominated for both Orchids and Onions.

“But one thing everyone agrees upon is removing cars,” she said.

Barrett then presented a joke slideshow with the top 10 ways to remove cars from Plaza de Panama, including confusing them with too many signs or twisting roads, introducing Transformers to the park, building a Wal-Mart in the middle of the park, creating a “parking is perpetually packed” iPhone application, or, as he said, “Two words: Zip line.”