S.D. to showcase powerful, sensuous opera that was originally banned in US

Although a great artistic success in Dresden, Germany, the opera was banned in Vienna, the United Kingdom and the United States and later performed with some cover-ups. But Strauss’ powerful score won the day, and “Salome” began to appear in the international repertory. Early music critics called the opera a “one-act tone poem” in keeping with Strauss’ popular orchestral works.

San Diego Opera opens its 46th season on Jan. 28 with this shocker that features two popular artists who appeared last season. Lise Lindstrom in the title role was a dynamic Turandot. She has all the lithe good looks to attempt the seduction of Jochanaan, the captive prophet we know as John the Baptist. Greer Grimsley, last year’s devil in “Faust,” takes the martyr’s role while warding off Salome’s sexual obsession with him.

The libretto for “Salome” is taken from the Oscar Wilde play written in French and premiered to stunned audiences in Paris in 1902. When Strauss attended a performance later that year in Berlin, he knew he had the subject for his next opera. The composer’s voluptuous music combined with his knack for creating robust vocal climaxes fit perfectly with the Wilde drama. 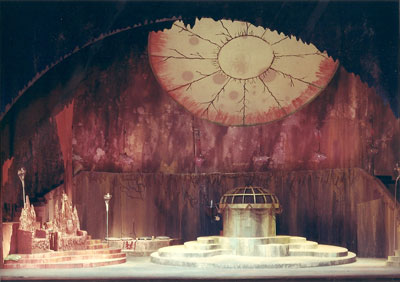 The stage set for the 1967 San Diego Opera production of "Salome," which featured a moon that pulsated to match the mood of the music. Photo courtesy of the San Diego Opera

The story, based on a brief episode in the biblical Gospels of Mark and Matthew, takes place in the first century palace of Herod, King of Judea. His wife, Herodias, is offended by the slurs against her morals preached by John the Baptist. She coaxes her teenage daughter, Princess Salome, to seduce the prophet being held in captivity to discredit the holy man.

Despite the princess’ sensual approaches, Jochanaan refuses to look at her and shifts his vengeance from mother to daughter. That set the stage for the climactic Dance of the Seven Veils to entice Herod to grant Salome a binding favor. This is the best known music in the opera, often performed as a concert piece to showcase the rich orchestration and tension that Strauss intended for the mesmerizing conclusion of his one-act spectacle.

After Salome drops the last of the veils to the delight of her lascivious stepfather, she demands the head of Jochanaan on a platter. What a shocking favor. Herod pleads for her to accept other riches to spare his being blamed for the death of a holy man. Salome insists that he honor his pledge.

The severed head emerges from the dungeon borne on a large platter accompanied by music of a catastrophic mood that shakes the rafters. I won’t attempt to describe how Lindstrom interprets her obsession over the bloody skull, as each artist chooses how to react with her prize. It’s sufficient enough to report that this was the scene that kept the opera off the stages of Vienna, the United Kingdom and the United States for several years because of lack of censor or opera patron approval.

Apparently audiences of early “Salome” productions were shocked and demanded that the grisly head be covered by a cloth. The Metropolitan Opera canceled all performances after opening night because of pressure from a prominent board member. The opera did not return to the Met until 1933 and has been a repertory regular ever since, providing a signature role for many of the soprano greats.

The first San Diego Opera production of “Salome” in 1967 had a huge moon that pulsated and changed its color to match the mood of the musical score (it turned red as John the Baptist’s head came up on a platter). Critics thought the concept was over the edge of propriety during the Dance of the Seven Veils, but the moon became a lasting image of that production. It also featured a rather revealing dance by the lithe spinto soprano Felicia Weathers as Salome in a flesh-colored body stocking swathed in filmy veils.

Ford is a past president of San Diego Opera and supports the opera archive at San Diego State University.

Patrick Ford's review of the opera tempts me to attend this production. Thanks for running the review.