Naval Base Coronado set the stage for a terrorist attack on Thursday morning, accented by AK-47 machine guns, a blown-up motor boat and bloody, armless casualties lying on the shore. (video)

It wasn’t a movie production or actual threat, but rather an annual U.S. Navy drill that helps security forces prepare for the worst.

“One of the most important parts of these exercises is to sit down and look at what you did right and what you did wrong,” said Capt. Yancy Lindsey, Naval Base Coronado’s commanding officer. “We do that on a local level and much higher level in the Navy so that we learn from this.” 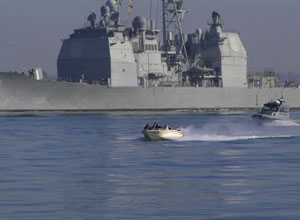 As part of anti-terrorism training exercises at naval bases nationwide, Naval Base Coronado set the stage for a attack Thursday in which mock terrorists on a motor boat attempt to "attack" the Navy's guided-missile cruiser USS Princeton. Staff photo: Mike Countis

Last year's simulation took place on 32nd Street at Naval Base San Diego and involved a fake bomb being strapped on a ship.

Dave Busby, the training and readiness officer at Naval Base Coronado, graded Thursday’s drill with a “B plus,” adding that the medical teams were “spot-on.”

A first responder at the scene performed initial interventions on a mock terrorist, like wrapping a prosthetic bloodied arm with gauze.

The simulated series of events looked much like those on an action movie set, involving lots of makeup, fake explosions, mock terrorists and blanks instead of real bullets.

The scene, which took place on surf and turf, went something like this: Four of the terrorists on a motor boat, armed with AK-47 machine guns, attempt to “attack” the Navy’s guided-missile cruiser USS Princeton. Security forces on the sea react, retaliate and cause the terrorist boat to crash onto the shore and blow up. 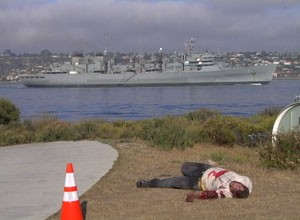 The company that provided the special effects — from the terrorist actors with convincing-looking injuries to the motor's explosion — was San Diego-based Strategic Operations. Staff photo: Mike Countis

Two of the terrorists are severely injured, moaning near the shore and bleeding. The two others make a run for it into a nearby building, which then turns into an active-shooter scenario.

The company facilitates hyper-realistic tactical training by setting up scenarios across the United States. Thursday's event was the first time the company has worked with Navy Region Southwest.

Amputees were in makeup up to an hour before the scene was set. One role player was outfitted in a cut suit, which is a next-generation way to simulate severe trauma on a body. The suit, which goes on like body armor, contains a full organ structure and can simulate internal bleeding. Medical teams can perform interventions as they would on a real casualty, even up to surgery at a hospital.

“It takes that medical side a lot further and is more realistic,” Howe said.

The company, which does its own prototyping, development and manufacturing, has been using the suit for the past eight months.

While its work solely involves military and security forces, the company’s roots are in Hollywood: It’s owned by Stu Segall Productions, one of the largest independent movie and film studios.

“The budget crunch is hurting [military] units,” said Howe, adding that training has slowed down over the past year. “We try to scale down our involvement to still meet the needs. You do what you can to keep prices down for everyone.”