Four decades ago, a coup for women’s rights at the Grant Grill

By JENNIFER McENTEE, Special to The Daily Transcript
Thursday, March 29, 2012

The Grant Grill in downtown San Diego’s US Grant hotel has long been a place where powerbrokers lunched. In the 1950s and the 1960s, the dark mahogany booths were the conclaves of politicians, lawyers, bankers and journalists. Anyone with a craving for conversation or mock turtle soup could partake.

That is, as long as that Grant Grill patron was a man. No women were allowed to enter the restaurant before 3 p.m. After that hour, women could come in if accompanied by men.

Women have had the right to vote in the United States since 1920, yet the concept of feminism didn’t gain momentum until the '60s.

Discrimination against women was commonplace enough that old-school venues like the Grant Grill posted signs prohibiting women without reproach.

Pat JaCoby was among the first group of women to protest the Grant Grill’s men-only policy in 1969, by “crashing” the restaurant at lunchtime and demanding to be seated.Staff photo by Sarah Strong

“Young women today take for granted that they’re not going to be pushed around. There was no such thing as complaining about anything that happened back then,” Kay Jarvis Prokop said in a recent interview. Then a food critic at the San Diego Tribune, Prokop would scarcely speak up if patted on the fanny in the mostly-male newsroom.

“You just accepted it,” she said.

So imagine the surprise of Grant Grill patrons and employees alike when in 1969, women started arriving during the lunch-hour in groups, demanding to be seated. The maitre d’ was flummoxed. The other diners chided and taunted the women.

Prokop organized the first group of Grant Grill crashers. They made reservations under the most gender-neutral name in their bunch — Sidney Windle — and alerted the local TV media.

Pat JaCoby was among that first group of women. She recalls how irritated she was that her male colleagues at the Tribune could just go across the street to the Grant Grill to interview people, but she couldn’t.

An old sign noting the Grant Grill's entrance policy says "men only until 3 p.m." (center plaque). It has been hanging at the restaurant since the 1940s and now serves as a memorial of the women's rights movement. The US Grant hotel honored the women who protested the rule with the plaques. Staff photo by Sarah Strong

The Grant Grill’s mock turtle soup was en vogue, and wasn’t served elsewhere in the hotel where women were permitted. It was the perfect excuse to demand access.

“It was the symbolism, not the soup,” recalled JaCoby.

Prokop said that when they arrived at the restaurant that June day, the maitre d’ told them they couldn’t be seated.

“They kept us standing there for about 20 minutes. All the men in the Grill were sitting there, all staring. It was terribly uncomfortable. But we stood our ground,” Prokop said.

When the women insisted that the restaurant was breaking the law by refusing to serve them, they were finally seated at “the worst table there was” in the far back. The wait for their order was ridiculous. What was supposed to be a half-hour lunch break took about two hours, she said.

Their meal was the top local news that night. And a movement was born.

More businesswomen began making reservations at the Grant Grill. Judith McConnell said she and fellow attorney Lynn Schenk were among the most persistent.

“They took us in after some hassle,” McConnell said, explaining that the maitre d’ even physically pushed her out the door at one point. “But we kept going back.” 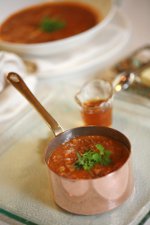 The Grant Grill's mock turtle soup, which is beef in fish stock, was a popular dish in the 1960s. It wasn't served anywhere else in the hotel where women were permitted, and was the perfect excuse for the protesters to demand access to the restaurant. The classic dish still appears on the restaurant's menu. Photo courtesy of J Public Relations

“It was so offensive to be shut out of a place,” McConnell said.

The women’s persistence paid off. The men-only policy was eventually dropped. And in 1995, many of those early trailblazers were invited back to the Grant Grill to witness the unveiling of a plaque in their honor.

“It was really great fun,” JaCoby said of the ceremony. “Everybody was so laudatory.”

US Grant Hotel sommelier Jeff Josenhans said the Grant Grill is today a mix of modern and traditional. “This is still a spot where influential people eat,” Josenhans said. “The lunch service is still very much lawyers and judges, but today it’s equally represented among sexes and races.”

Mock turtle soup — which is beef in fish stock — is still on the menu, alongside more contemporary offerings such as hamachi and locally raised produce.

And the women who pressured the Grant Grill to overturn a sexist tradition are now celebrated guests when they dine there. “We know who they are when they come in,” Josenhans said.

Now four decades later, the women say they appreciate how the story of their civil disobedience has endured.

“In retrospect, it was more of a big deal than it was at the time,” JaCoby said. “It wasn’t a crusade. We needed a place to do what the men do. We took a turn at dishing up equality, and we’re honored that it meant something.”