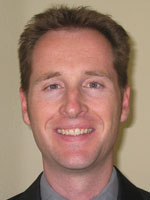 Brad Chisum, co-founder and CEO of Lumedyne Technologies, admits his company is wooed by investors all the time to move to the Bay Area.

It would almost make sense, he admits. The company is commercializing next generation sensor technology, so why not relocate to the hub of infrastructure and engineering?

“Qualcomm didn’t,” he points out.

The big reason to stay put, he said, is to stay close to SPAWAR Systems Center, San Diego — Chisum’s former employer and the partner it’s licensing the technology from.

In Chisum’s opinion, he thought the technology could be applied to accelerometers to measure vibrations and energy harvesting — but that wasn’t enough validation for him. So he earned his MBA at San Diego State University in 2007 and started the company in the process.

“It was perfect. I used the technology in various classes,” he said.

The company won first place at Moot Corp, the “Super Bowl” of business plan competitions, and Chisum was invited to ring the opening bell at the NASDAQ stock exchange.

The successful technology startup company has raised approximately $20 million to date in funding.

“By the end of 2013, I’d like to see that number double or more. From here on out we are going to need $20 million or more each year to hit targets,” Chisum said.

Unlike traditional technology startup companies, Lumedyne is not funded through venture capitalist investment. Instead, Chisum has secured funding from Lumedyne’s future customers and has successfully negotiated multimillion dollar contracts with large corporations.

Its 23-person staff at its Kearny Mesa headquarters is expected to double by the end of the year.

“We intend to be on that kind of growth curve at least for next three to four years. That’s where partnerships become critical,” he said.

Sensor technology, across the consumer, auto and oil industries, is a whopping $15.3 billion market. He says the largest piece of that pie will come from the wireless field, and the company is currently in the market for a partner in that space.

Its biggest customer to date is Ion Geophysical, an oil and gas company that essentially takes an “ultrasound” of the Earth to find out where and where not to drill.

Ion prefers Lumedyne’s sensors to others on the market because they are more sensitive, smaller and high-res.

Another big market opportunity is the defense sector, and the company has received government funding to work on military navigation systems. For example, the sensor can go inside an unmanned aerial vehicle that’s used by the Navy.

It's nice to see succeful businesses committed to supporting the San Diego region. The next Qualcomm maybe???