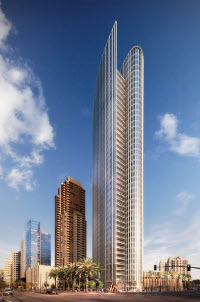 Construction will soon begin on a high-rise residence on Broadway and Pacific Highway. Prices will start at $750,000 per unit.

A 41-story, 232-unit residential tower planned by Bosa Development at the southeast corner of Broadway and Pacific Highway has gotten the approval of the Centre City Development Corp. The $250 million project is tentatively scheduled to start next year, with completion in 2016. The starting price tag will be $750,000 per unit.

Plans call for 16,000 square feet of retail space on the first level, and 419 parking spaces in a three-level underground garage. Units range from 956 to 2,083 square feet with one to three bedrooms, with the majority of units at 1,570 square feet and two bedrooms. Amenities include a fitness center, second-floor garden area, fourth-floor pool deck, and outdoor roof deck on 41st floor.

A plaza area along Broadway will include decorative paving, seating areas, a fountain and reflecting pools, lighting and public art.

Designed by New York City-based Kohn Pedersen Fox Associates, the sleek, curved glass tower is inspired by the ocean and resembles a spiral shell and wave forms. The oval-shaped tower has an angled roofline and is oriented east to west to minimize its exposure to western sunlight, while maximizing the downtown view corridor toward the waterfront. Vertical painted metal fins enhance the building’s energy performance by blocking solar heat gain. High-performance insulating glass units with low-e coating will be applied throughout the building.

Vancouver-based Bosa has completed seven downtown San Diego condo towers so far, the latest being Bayside on Ash Street, west of the railroad tracks. Completed in 2009, the 36-story high-rise with 219 condos opened with a price tag of $569,000 per unit. Other Bosa condo towers include Horizons, Park Place, Discovery, The Grande, The Legend and Electra.