Steve Ogles first got into the camera business in the early 1970s because he wanted to take pictures of his friends surfing.

Fast-forward a few decades, and he’s running a camera empire that puts underwater stars on the big screen and waterproof covers on iPhones. Oh, and he’s also a soon-to-be retired American Airlines pilot.

The renaissance man has been rooted in Coronado since his pre-teen years, when the origins of Watershot Inc. came about because of his passion for surfing and photography.

Today the mechanical engineering, consulting and product design company bills itself as a one-stop shop for custom and production waterproof enclosures. Its latest creation is the new $99 underwater camera housing for the iPhone, which was unveiled Aug. 30.

Its advanced product line is built around the Canon series of high-resolution digital cameras and is supported by a growing lineup of options and accessories.

Watershot, which has offices in Encinitas and Coronado, relies on overseas partners to add turn-key, door-to-door solutions from manufacture to shipment from its 120,000-square-foot factory.

The idea for the company started back in the early 1970s, when Ogles looked around and saw there were little to no camera housings available for surfing photos. 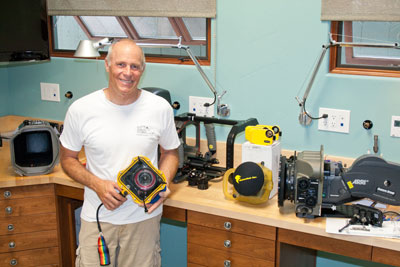 He took a surfboard and stripped its glass, took the foam out and made a mold tool.

Ogles’ love affair with flying also came at an early age when his dad gave him a unique after-school project: rebuilding an airplane that was sitting in the family’s garage.

“My dad was a great mentor my whole life and still is today,” he said.

When he finished high school, with $350 in his pocket, he boarded the refurbished plane and went island hopping.

He soon decided to make a career out of flying. So, he graduated in three years from San Diego State University in 1980 and was accepted into the aviation officer candidate program for the U.S. Navy.

“The whole time I was still taking pictures and surfing, even in the Navy,” he said.

Itching to dive into another field, he opened a camera housing operation in Coronado, which would later evolve into Watershot in 1995. After making his first video camera housing, word spread and people were lining up to get their own.

Still, that wasn’t enough work for the go-getter. So, he tried his hand in commercial aviation by becoming an American Airlines pilot.

“I used to basically work 16 to 18 hours a day in my workshop on my days off when I was not flying for the Navy or American Airlines,” he said.

About 12 years ago, he expanded the company into the Hollywood film industry by teaming up with cinematography veteran Pete Zuccarini to lease out motion picture imaging equipment.

The separate entity, called Zuccarini Films Inc., contracts services from Watershot to do the design engineering for the camera housings. Ogles and Zuccarini own the equipment.

The company negotiates a rental agreement with movie studios that is based on the length of production and whether they want spares on set.

“We invoice the studio, the checks roll in, and we pay down the enormous amount of money invested in the equipment,” Ogles said.

“It’s not just a box, it’s everything that goes in it, like electronics. There’s a huge lens library,” he said.

The company’s equipment has been used to film the "Pirates of the Caribbean" series, "Into the Blue" and "Dolphin Tale."

The latest Watershot technology was deployed to film Robert Redford, who battles the sea and other watery elements in "All is Lost." The water sequences in the remake of "The Secret Life of Walter Mitty," starring Ben Stiller, will also be filmed with the equipment.

The equipment was also used to film an NBC Olympic spot on swimming sensation Ryan Lochte.

Johnny Depp’s famous mug will be filmed using Watershot’s equipment for the Disney action flick, "The Lone Ranger." The big budget Western will come out next year.

Ogles manufactures, assembles and maintains the equipment, while Zuccarini stays on the artistic side as underwater director of photography or underwater cinematographer.

When production is going on, Ogles stays out of sight and is typically available by phone if any problems arise. But once his 25-year career soon ends at American Airlines, he will have more time to be on the set with the equipment, on hand to tweak or fix any issues with the gear.

“That will provide a great deal of relief for people who are not particularly savvy with the equipment,” he said.

Starting in 2005 the company entered the audio underwater market, developing billet machined housings for MP3 players and waterproof headsets so that swimmers can cruise while listening to music.

In the last five years, the LED lighting industry has come a long way.

“You can get a lot of light with low power consumption for a long period of time, with spectacular brilliance. It’s all compact and very cool looking,” he said.

The $2,499 LED lighting kit is designed for the underwater photographer or videographer who needs a durable and bright video light system. The dual light heads feature a high lumen output with resulting burn times of up to three hours of continuous light.

The concept of encasing the iPhone has been a six-month process. A custom app can be used to control the phone’s video and camera functions once the cover is on.

“I think it’s a good marriage, so we will see how we do,” he said. “Apple has invested a bit of design and engineering dollars into a camera for this smartphone.”

The iPhone 4 started out with four lenses, he said, and the 4S model “made the camera better,” he said, with five lenses.

“I wouldn’t be surprised if the number of lenses increases with the 5 coming out,” he said.

The iPhone’s spectacular camera isn’t its only good attribute.

“The quality of the video is the best, in my opinion, of any smartphone,” he said.

Reblogged this on and commented:I was pliyang in my pool with my daughter the other day and she commented to me that wouldn't it be great if there was a way to to take photos with an iPhone or iPod Touch. So when I saw this post I just had to re-blog it for all to see. I will take a serious look at getting one of these for my daughter who has become a big fan of Instagram and take tons of great photos. I will post some of her photos on here at a later date, they are really good.