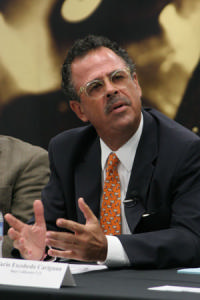 San Diego and Tijuana have quietly fostered a working relationship over the years, and now is the time to tell the world.

Economic development leaders from both sides of the border recently gathered during a videotaped roundtable at The Daily Transcript, sponsored by Tijuana Innovadora.

The focal point of the discussion was Tijuana Innovadora, a conference that will take place Oct. 11 to 21 to educate San Diegans and the world about what Tijuana has to offer.

The largest conference on the United States-Mexican border, which expects to exceed the 690,000-attendee mark from the inaugural 2010 Tijuana Innovadora, will showcase such industries as automotive, aerospace, clean tech, electronics and medical devices, as well as strategic design, mass media and cinematography.

It's been hard to squash misperceptions about the south of the border city, however, because bad news travels fast.

In reality, the Mexican federal government is looking at Tijuana as a model on how to improve a city and weed out drug trafficking.

Mier y Terán is living proof that Tijuana is a safe place; he's lived there for 62 years without a hitch.

“Sometimes we think we may have to take everyone down, one by one, to understand it’s a great place to go to do business,” said Christina Anne Luhn, director of the mega-region initiative at the San Diego Regional Economic Development Corp.

As a "kid from Kansas," she says a job that lets her go to a different country once a week is thrilling. Part of her role is to work with the Tijuana EDC.

Its executive director, Flavio Olivieri, points out that a surge of immigrants are adding to Tijuana's fast-growing population.

Tijuana has a leading — yet widely unknown — role in manufacturing and exporting.

Some car and electronic companies with a large presence in the region have churned out higher output levels in Tijuana than at any other production facility worldwide.

Mattel (NYSE: MAT) and Sony (NYSE: SNE) rank their Tijuana operations on the top of the list when it comes to volume.

Aerospace and medical devices are two growing areas that require high levels of certification and training.

“Those sectors … require the highest level of expertise and quality control,” Olivieri said.

Tijuana and San Diego have a combined 250,000 manufacturing jobs, and that sector represents 35 percent of the GDP of Tijuana.

One misperception is if Tijuana did well, they might be competing with jobs in San Diego.

“Now people understand we are a region and can do part of the work on one side,” said Martinez, a journalist in the border region for the past 20 years. “To be successful you have to get together. Otherwise you won’t be as competitive as a region.”

There’s much left to do be done to foster that relationship, like focusing on innovative opportunities to create products faster at a more competitive cost.

“The synergism between our complimentary capabilities is at the tip of the iceberg. We haven’t dug into how we can collaborate,” Olivieri said.

One of the big opportunities at the moment is energy, said Steve Williams, partner at Sentre.

“Sempra was telling us last week there is $5 billion worth of projects that are coming online potentially out there on both sides of the border because we are on the same grid," said Williams.

According to Williams, global competitiveness is the underlying theme to keep in mind when working together.

“The only way out of the recession is to compete globally," he said. "I think production sharing and both sides working together is the solution, for Tijuana and San Diego or for Mexico and the United States.”

Tijuana is busy in its factories every day, making everything from TVs to telecommunications equipment for airports and astronauts, to heart pacemakers. But physically transporting that plethora of goods needs to be done via a "smart border," said Williams.

“A smart border is the cash register of our economy. Think of all the goods, all the people that need to go through those borders,” Williams said.

San Diego is pushing for the funding to finish the San Ysidro border expansion, which will open up new pathways for trade and tourism at the world’s busiest land border crossing, where Interstate 5 crosses into Mexico at Tijuana.

Thousands of people are expected to make the trek across the border in October for Tijuana Innovadora, which is gaining attention from other U.S. and Mexican cities.

Tecate, a small city in Baja California, and Los Angeles have shown interest in being included in the event. Martinez said that’s a possibility for 2014 as the conference keeps growing.

For this year's conference, all eyes are on San Diego's budding relationship with Tijuana.

In September, banners publicizing the event went up in downtown San Diego's Gaslamp Quarter, marking the first time an event outside the city has been promoted.

“[It’s] because Mayor Jerry Sanders understands this is a regional effort,” Martinez said.

Plastered on the posters are photos of the nearly 100 speakers scheduled for the conference.

Mier y Terán calls the conference a “window” for San Diegans who are stuck on misperceptions about Tijuana.

“We have a store with wonderful merchandise. We need to push the door in," Mier y Terán said.

* Enrique Mier y Terán, a founder of the maquiladora industry

Jerry Sanders on the Chamber's trip to Mexico, recent endorsements

April 27, 2015 -- Executive Editor George Chamberlin speaks with Jerry Sanders, president and CEO of the San Diego Regional Chamber, about the chamber's recent trip to Mexico, the chamber's recent endorsements of candidates for local office, and the congressional lunch.

Feb. 11, 2015 -- George Chamberlin sits down with Jerry Sanders, president and CEO of the San Diego Regional Chamber, to discuss the chamber's accomplishments in 2014, goals for 2015 and the new Chargers stadium task force.

Jerry Sanders on his trip to DC

Sept. 11, 2014 -- George Chamberlin speaks with Jerry Sanders, president and CEO of the San Diego Regional Chamber of Commerce, about Sanders' trip to Washington, D.C., where the delegation he led talked to congressional leaders about the pure water program, border relations, and more.