Construction of Carlsbad desalination plant may be just months off

The likelihood that Carlsbad may be home to the region’s first major seawater desalination plant within three years has gained substantial momentum.

A non-binding water purchase agreement between the developer of the proposed Carlsbad Desalination Project, Poseidon Resources, and the San Diego County Water Authority was reached Thursday, setting in motion a process that may lead to a construction start around three months from now.

The public will have a chance to learn more and comment on the tentative deal through two meetings, one Tuesday and another scheduled toward the month’s end.

Still considered a proposal as it has yet to be constructed, the Carlsbad Desalination Project calls for a 50 million gallon per day — equivalent to about 56,000 acre-feet per year — seawater desalination plant to be built on a corner of the Encina Power Station on the edge of Carlsbad’s Agua Hedionda Lagoon.

The desalination plant’s intake station, connected to the upstream portion of the Encina Power Station’s discharge channel, would deliver about 100 million gallons of seawater per day to the desalination facility. Half of what it takes in will be converted to drinking water and delivered to Carlsbad and surrounding communities by way of the project’s other component, a pipeline running from Carlsbad into San Marcos.

The rest of the water, with a higher concentration of salt, would be returned to the discharge channel and diluted with more seawater before being discharged back into the ocean.

Poseidon’s mitigation plan, which proposes the 66-acre restoration of wetlands in the South San Diego Bay Unit of the San Diego National Wildlife Refuge, received approval from the California Coastal Commission in early 2011, and the project itself has already received all necessary approval from permitting agencies. 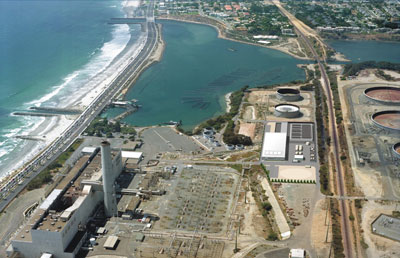 This rendering depicts where the desalination plant would be built, just northeast of the Encina Power Station.

But its developer has been waiting to make any significant progress on construction pending an agreement for some agency to buy its product.

Since preliminary construction work began on the site in November 2009, Poseidon has spent its time cleaning up and clearing out old power plant equipment from the site that’s no longer operational. Without a contracted customer and no way to finance bonds needed to move forward on construction, that’s about all Poseidon could do.

“The bonds are basically backed by the strength of the purchase agreement,” McLaggan said.

It was January 2011 when Scott Maloni, vice president of development for Poseidon, said he had expected a deal to be reached within a couple of months, saying at the time that he hoped for an agreement by spring 2011. Negotiations between the Water Authority and Poseidon have essentially been ongoing since the summer of 2010.

While the project has stood in limbo through the waiting, McLaggan said he respects the Water Authority’s deliberate approach.

“I have to hand it to the Water Authority,” McLaggan said. “I think they’ve done a tremendous job in terms of bringing forward a first-class team of experts, both legal and technical, to guide this dual-prong process of due diligence.”

McLaggan said final approval of the agreement, if it is adopted, appears to still be a couple of months off, as the Water Authority has yet to complete its two planned public meetings on the proposed agreement and has provided a 60-day window for its member agencies to contract for shares of the water before it makes a final decision.

“They don’t know exactly how long it’s going to take to run that process, but they think 60 days is an adequate amount of time, and it may be less,” McLaggan said.

The two public meetings regarding the draft agreement were originally scheduled to take place in September. The extra time needed to produce the tentative deal had caused two postponements of the meetings. But with a deal now struck, the Water Authority can move forward with the meetings, planned for 6:30 p.m. Oct. 2 at the Water Authority’s Kearny Mesa headquarters, and 6:30 p.m. Oct. 10 at the Faraday Center in Carlsbad.

Under the released water purchase proposal, the Water Authority would agree to purchase water from the Carlsbad facility for 30 years, with Poseidon as the owner and operator of the desalination plant for at least the first 10 years. That leaves the responsibility of site engineering, design, permitting, construction and plant start-up with Poseidon.

The Water Authority would be obligated to purchase a minimum of 48,000 acre-feet of water per year, and up to a maximum of 56,000 acre-feet. The total price for the water — including costs to make improvements to the Water Authority’s pipelines and treatment plant to accommodate the new supply — is estimated at $2,042 per acre-foot, if the maximum amount of water is purchased, to $2,290 per acre-foot if the minimum is purchased.

The impact on individual’s water bills will vary depending upon local water agency decisions, the Water Authority said in a press release, but the average household’s water bill is estimated to increase approximately $5 to $7 a month by 2016 to pay for the new supply.

Though subject to change, and even denial by the Water Authority’s board, the tentative agreement makes the project seem a bit more real after years of discussion.

Since November 2009, when grading and ground-level work began on the site as part of the project’s first phase, all vertical construction has hinged on the water purchase, which McLaggan said will serve as the project’s primary financing mechanism.

The facility will cost about $691 million, plus about $213 million in financing costs on the underlying debt — mostly from interest deferred during the estimated 35-month construction, McLaggan said.

“Under reasonable conditions, we should be able to market the bonds and close financing within 30 days of the Water Authority action,” McLaggan said.

Poseidon’s contracting team, including the joint venture of Kiewit-Shea Desalination and Israel-based Israel Desalination Engineers, has been assembled for some time, McLaggan said, and will be ready to build as soon as notices to proceed are issued.

A demonstration seawater desalination plant, a fraction of the size of the proposed full-scale facility, has been operated under Poseidon's watch at the Encina Power Station since 2003.