When homebuilder Laura Parker filed a Leadership in Energy and Environmental Design (LEED) certification application for a Del Mar home she was building in 2008, she asked to be put in touch with other area homebuilders so she could learn how to build a green home from them. She was shocked to learn hers was the very first residential LEED registration filed in San Diego.

"I was a relatively new builder at the time, and thought I was behind the times and wasn’t fully up-to-speed on green building,” said Parker, owner of Del Mar Restoration. “To find out I was ahead of the times was a shock to me."

To achieve LEED certification, a home must be newly built or substantially gutted and renovated, as well as earn a minimum of 45 points on a 136-point scale. A home is awarded a certified, silver, gold or platinum rating, depending on the number of points it earns.

Undaunted, Parker began educating herself and her subcontractors, and she set a goal to achieve LEED platinum.

"My goal was to be a role model for all builders and find any innovative way to create a green-built house," Parker said. 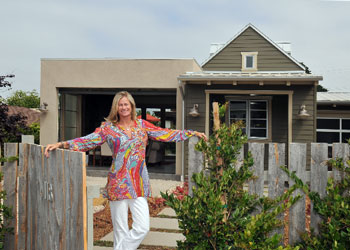 Laura Parker, owner of Del Mar Restoration, was part of a team that built a home that was recently named "the greenest" in California. Photo by Martin Mann

"At the end, I had no idea the rating we’d get, but we ended up being the highest-rated house in all of Southern California and the second highest in the state," Parker said.

Inside and out, it is a model of energy and water efficiency and air quality, items that get the highest LEED ratings.

Parker approached Paul Linden, a University of California, San Diego professor in mechanical and aerospace engineering and director of NatualWorks, whose goal is to promote sustainable architecture through energy efficiency using natural building systems. Linden applied the principles of fluid dynamics to contribute to the design of the Children’s Museum of San Diego, and although he hadn’t done residential design, Parker said he was happy to apply the same methods to design a similar system that relies on prevailing winds to passively cool and heat the home.

Parker described the "solar chimney" Linden designed for the home as a channel that runs through the house. Drawing ocean air into the basement, it cools the house with natural ventilation and circulates fresh air every three hours.

Linden also designed a thermal mass concrete fireplace wall in the living room that retains both hot and cold air to maintain a constant temperature within the home.

"Those two items are extremely innovative and unique," Parker said. "I’ll use them now any time I build." 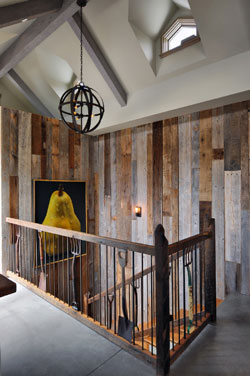 The North County home was the first residence to be filed for LEED certification in San Diego County. Courtesy photo

"It adds insulation to the house, and the basement feels like a normal, above-grade space, not damp and dank," Parker said.

Parker selected materials with low or no volatile organic compounds or formaldehyde. She also used certified sustainable wood for the interior doors and framing.

"More than anything," Parker said, "This is a very healthy environment to live in. You walk into the house, and it doesn’t have that new house smell.”

Parker used recycled products, too. Recycled barn wood is used inside and a friend who likes antiques found a selection of old shovels and pitchforks that Parker used for the stairway balusters.

Parker recently received her third green home commission and is currently working on a 4.5-acre horse property, which will be the first LEED certified home in Rancho Santa Fe. The existing 1970s-era, 3,700-square-foot home, vacant for more than 10 years, has been gutted. She’s rebuilding the entire home and adding a guesthouse and horse stalls. Although she’s still assembling materials, she will incorporate many of the systems and elements used in the Del Mar house to achieve platinum rating for the ranch-style home.

“It will be an extremely healthy house,” Parker said. “The homeowner is into recycled materials and is going with a barn/horse ranch theme.”

Parker has been asked to make a presentation on green homebuilding to the Del Mar City Council.

“My hope is that this becomes more the norm. People are still a little skeptical about green building being more expensive, and I have to laugh at that because it’s no more expensive to build a durable, healthy house,” Parker said. “It’s so simple. You just have to use the correct materials.”

James is an Encinitas-based freelance writer.