When Cecilia Aguillon, director of marketing and government relations for Kyocera Solar Inc., immigrated to the United States from El Salvador as a teen, she grew into a young adult with a lofty goal in mind: to save the world.

Her journey to a now multi-decade career at Kyocera was an accelerated one, placing her, as she sees it, in line toward accomplishing that goal without much delay. Following her completion of high school in Los Angeles, she began the journey at UCLA, where she studied political science and international relations.

Already a native speaker of Spanish, and an adopted speaker of English, she wanted to learn another language that would not only broaden her vocabulary, but provide an advantage in the worldwide market.

“Japanese seemed so foreign to the Romance languages, and I wanted to study something that was different,” Aguillon said.

It was easy to pronounce, for a Spanish speaker, she said, and its perceived beauty to her further bolstered her desire to learn it. So she did, and even spent some time in Japan after graduating from UCLA.

While there, she didn't just learn the Japanese language. She learned of the Japanese culture also, including how they view caring for the environment.

From then on, she knew working for a multinational Japanese company would be of interest to her after graduation. 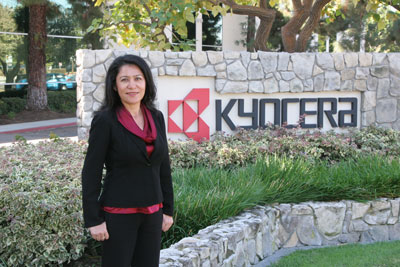 Cecilia Aguillon is the director of marketing and government relations for Kyocera Solar Inc. Staff photo by Laura Hansen

“I wanted to do something that was good for the environment, while at the same time helping developing countries, like El Salvador, to develop sustainably,” Aguillon said. “It was so natural to get into it, because at the time, Japan was the only market really viable in solar energy.”

When time came for graduate school at UCSD in 1995, she decided halfway through to again visit Japan for a year to study more in Tokyo.

“I knew Kyocera when I was there,” Aguillon said.

In fact, it was recommended by some even in those days for her to seek employment there, but she didn't consider herself a good fit at what she viewed as such a high-tech company.

But Kyocera’s presence in San Diego, where Aguillon returned to study, and connections she had made within the company by then, made a difference after graduation.

While many of her friends gained employment in the months following graduation, Aguillon passed up five offers from various companies, holding out for a more perfect vision of what she wanted to do. Just as she began to feel the decisions to hold out weighing on her, she received an offer from Kyocera six months after graduation from UCSD.

“It was kind of like a miracle,” Aguillon said.

A job opened in the company's solar division working with consumer products. She jumped onboard. Within another six months, another opportunity came when Kyocera bought a large solar distributor.

But the expansion of the solar division meant moving the solar hub to Scottsdale, Ariz. Rod Lanthorne, Kyocera International’s head at the time, didn’t plan on moving Aguillon with it. Instead, he saw a chance to keep her in San Diego, to promote her to the managing position in the company’s consumer products division.

She wasn't sure she wanted the position, but Lanthorne’s offer for her to head a part of the company, and Lanthorne’s expression of trust in her to do so, were too much to pass up.

But in 2002, Aguillon decided it was time for a change. Though enjoying her time running around in cities like New York and marketing Kyocera products in large cooking magazines and publications, her heart wasn't in it. And she knew it.

“Driving around with chefs in limousines, and going to New York at the food shows and all that, it was so much fun,” Aguillon said. “It was rewarding and I was also fulfilling my commitments to the company -- it was profitable. So everybody questioned my sanity.”

But it came down to doing something more rewarding than that, she said, even if it meant moving to a financially struggling solar division in Scottsdale without being the top dog or going to Japan. She set goals while in the consumer products division, specifically the top goal to land an account with Williams-Sonoma for the marketing of Kyocera's cooking products. She met that goal, which meant it was time to move on.

“I knew in my gut solar was going to change energy,” Aguillon said.

And it was her passion to begin with, giving her more reason to wake up in the morning and want to work than she had felt in the consumer products division, she said.

By 2004, she returned to San Diego on behalf of Kyocera Solar, bringing her closer to ground zero in terms of the proximity to the company's new solar factory in Mexico and action surrounding California’s work to create the California Solar Initiative, or CSI, at the time.

“The California market started to boom, and I've been here ever since,” Aguillon said.

While working with solar industry groups to help shape what eventually became the CSI, she pushed for the inclusion of performance-based incentives instead of rebates. But the industry was divided on the idea.

“There were some in the solar industry who were afraid of getting paid over time -- you put in a meter and get paid per kilowatt-hour,” Aguillon said.

They thought the customers would be used to rebates and that the market might crash.

But Aguillon continues to push performance-based incentives to this day, feeling that's the best way to ensure quality work in the industry that can continue its rise rather than diminish its perception.

“The philosophy of Kyocera is to do what's right as a human being,” Aguillon said. “But in the end, the commission ó it was the Public Utilities Commission who I think (understood) it.”

But her work since hasn't focused solely on California. Kyocera is a member of more than a dozen state chapters of the Solar Energy Industries Association, and as head of marketing and government relations, she has to keep tabs on their progress, add to it where she can and visit them all.

Forever needing that passion to feel her place in the company is the right one, she has goals yet to meet that won't likely have her leaving solar anytime soon, like promoting feed-in tariffs for solar energy, which she thinks will be the next big leg-up for the solar industry as the California Solar Initiative winds down.

“What keeps me going now is, I'm working in so many different states now,” Aguillon said.

She also working across international borders again, helping to influence hopeful and developing solar programs now in Mexico and other Latin American countries.

As for the whole “save the world” thing, Aguillon finds herself a bit modest these days, but nevertheless feels she's making an impact.

“I don't know if I’m saving the world, but I’m thinking I’m making the best effort I can, and what I love about it is I’m with a company that has never told me, ‘This is my business model, and this is what I want you to promote,’” Aguillon said. “It’s a company that says, ‘I want you to do what’s right for the human being.’”

Cecilia is the kind of competent, caring manager that I would like to work with in a global company that is focused on finding a sustainable competitive advantage in a sustainable world economy. Thanks to the San Diego Transcript for introducing me.