The research vessel Roger Revelle, owned by the U.S. Navy's Office of Naval Research and operated by Scripps Institution of Oceanography at UC San Diego, returns Friday to San Diego after a six-year deployment. (video)

“R/V Roger Revelle is the premier vessel in the Scripps Institution of Oceanography academic fleet. We welcome her home and applaud her captain, crew and ship operations for six years of superior support of sea-based science,” said Cathy Constable, acting director of Scripps. “We look forward to the ship’s return to sea and new expeditions that address vital concerns for science and society.”

“Since departing from its home port in Point Loma on Dec. 1, 2006, R/V Roger Revelle has conducted 86 missions in many parts of the western Pacific. It has been seen in numerous countries and hosted many U.S. and foreign scientists. The science enabled by this ship’s voyage is contributing new knowledge about the oceans and atmosphere, and will open many additional avenues of research. Our Navy is pleased to have such ships to use and share among federal agencies,” said Dr. Frank Herr, head of the Ocean Battlespace Sensing Department at the Office of Naval Research.

The 273-foot ship’s scientific missions involved explorations from the deepest parts of the ocean's remote trenches to the upper atmosphere, covering topics relevant to society and of significance to the U.S. Navy and national security. 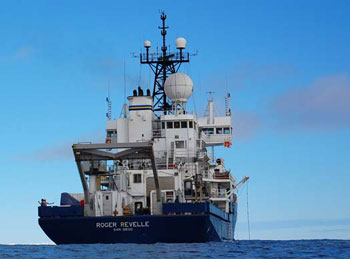 Earlier this year, Scripps scientists and ship operations crews visited Vietnam for a series of ship tours and classes with Vietnamese scientists. That goodwill visit paved the way for physical oceanography expeditions planned off Vietnam in 2013, leading to the establishment of a new scientific collaboration between oceanographers from the two countries since the Vietnam War.

Before heading out of San Diego on an ambitious science support schedule next year, R/V Roger Revelle, launched in 1996, will undergo routine maintenance at a West Coast shipyard. Additionally, in San Diego, nearly $300,000 will be spent at local maritime businesses on Roger Revelle upkeep operations and maintenance.

“Welcome home Scripps vessel Roger Revelle. The importance of home porting in San Diego one of largest academic research fleets in the world is immense, ranging from the scientific achievements and worldwide recognition to the economic impact," said Michael Jones, president of The Maritime Alliance. "Over the next couple of months many hundreds of thousands of dollars will be spent on maintenance and provisioning of Revelle, all of which supports San Diego service providers and businesses. We are proud to be able to help recognize the extraordinary regional significance of Scripps and its fleet.”

Roger Revelle (1909-1991), the ship’s namesake, was director of Scripps Institution of Oceanography from 1951 to 1964. Long associated with the University of California, Revelle’s vision and energies led to the establishment of the UC San Diego campus in 1960.

“It is wonderfully appropriate that the research vessel named in honor of Roger Revelle, the founder of this great campus, returns home on the occasion of UC San Diego’s Founders’ Day," said UC San Diego Chancellor Pradeep K. Khosla. "This homecoming follows six years of exploration and is a prime example of the amazing work and research of our campus members over the last five decades.”

The research vessel was named for Roger Revelle by the U.S. Navy to honor his scientific contributions. He was one of the nation’s most prominent oceanographers, a pioneer of climate change research and a world leader in the application of science and technology to help solve problems in developing countries.