The mood was electric Tuesday in the southeast corner of the main parking lot at the San Diego Zoo.

With the unveiling Tuesday of what it called the Solar-to-EV Project — a 90-kilowatt solar photovoltaic canopy that directly charges electric vehicles in the zoo’s parking lot — the collaborative took its work to a new level.

Visible from the street when driving south on Park Boulevard between Zoo Drive and Zoo Place, the project’s 10 canopy structures can produce enough energy at peak capacity to power 59 homes, as well as five electric vehicle (EV) charging stations attached to the system. Four of the charging stations are directly on selected columns supporting the structures and one is located in a nearby ADA-accessible parking space. With the help of technology developed at UCSD, a 100-kilowatt-hour energy storage system is also tied to the panels, and used to offset power demands on the grid to charge the vehicles. 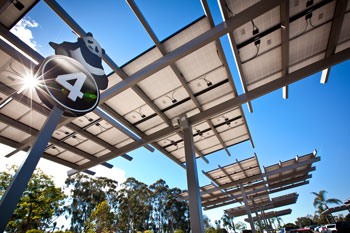 Jim Waring, president and CEO at CleanTech San Diego, said the visual scale of the project sets it aside from much of the other work the Smart City San Diego initiative has accomplished so far. But he said success in getting it done through the partnership of private enterprise, nonprofit work and municipal government shows how much can be accomplished when all the pieces come together.

“Success always breeds energy, and energy breeds more success,” Waring said after the official dedication, hinting that the Solar-to-EV Project is just an early version of more ambitious plans for the collaborative.

Smart City San Diego, he said, has more large projects in its sights, including a possible plan — still too early in proposal and planning stages to announce in detail, he added — to build a local apartment development that’s powered 100 percent by solar energy.

“The idea is to get technologies out to be tested,” Waring said, later adding that through the technology roll-outs, both successes and failures are to be expected, with both being equally valuable to the learning process and progression of clean technology.

He also spoke of the plan announced at the dedication by Rick Gulley, president of the Zoological Society of San Diego, to turn the zoo into the most sustainable on on the planet, with the help of CleanTech San Diego.

“I’m sure the Smart City team will have a lot of role in that,” Waring said.

The zoo’s ambitious sustainability plan, Gulley said, is not yet fully devised, and no timeline has been set for when it’s expected to be achieved. But the San Diego Zoo is committed to it enough to announce it, he said.

When the Solar-to-EV Project broke ground in September, Jay Miller — vice president of operations at Independent Energy Solutions, the contractor hired to perform the build and installation, said the hope was to complete the project and dedicate it before San Diego Mayor Jerry Sanders’ December exit.

“[Sanders has] been a real proponent of the clean city, clean tech,” Miller said at the time. “We want this to be one of the last things he does as mayor.”

And so it was Tuesday, as Sanders joined Waring; Gully; Jim Avery, SDG&E senior vice president for power supply; and Bill Jayne, regional executive for the western U.S. at General Electric, in dedicating the roughly $1.2 million project.

About to leave the mayor’s desk after two terms in the position, Sanders said he has plans to sit and talk with mayor-elect Bob Filner this week as the city prepares for an administrative transition. Filner, Sanders believes, will be “a natural ally” for the initiative Sanders’ administration has taken in embracing solar technology.

“He’s always been up on these issues,” Sanders said. “I think he sees this as a win-win for San Diego, but I’ll certainly let him know how it’s helped San Diego.”

According to Avery, the project is the first of its kind in the nation, bringing together the three components of solar panels for electric vehicle charging, power transfer (either feeding the electric grid when the solar system produces more electricity than needed or pulling power from the grid), and energy storage.

As he answered questions, about 20 electric vehicles sat under the shade of the solar panel structures, referred to as “trees.” Of the five EV power stations, two were in use.

“Right now, the sun is out,” Avery said. “There’s only one, two plugged in here. This is producing far more energy than can go here, so that energy is being pushed into the grid.

“But our control center can actually decide that we don’t need to store energy now, that we need it on the grid. So we can basically control that battery to put the energy back on the grid.”

March 20, 2014 -- George Chamberlin speaks with Eric Basu, CEO of Sentek Global, and Holly Smithson, director of Cyber Center of Excellence, about cybersecurity and its economic impact on San Diego.