Making a life from a father's gift

When entering San Diego's business community about 30 years ago, Clint Walker’s aim had nothing to do with being in the solar business. His success as the co-founder and president of Southwestern Solar Systems since his entrance to the business in 2009 came about in much the same fashion his other major endeavors have.

Armed only with youth, confident ambition and the knowledge absorbed through what some saw as a remarkable ability to teach himself engineering, Walker founded Air Management Systems -- his first company, which was not in any way related to solar — with just two workers below him in 1983. Much like when he started Southwestern Solar, he had no formal training. In both cases, he took nothing and turned it to something.

That ability, he recalls, had always been with him growing up.

As a child and teen, he carefully watched his father run a small radiator shop in East County. When he became old enough to work himself, he worked at Hawthorne Caterpillar Machinery -- still with no formal study of engineering behind him — in the weld shop.

Hawthorne had on its list of to-dos a few projects that needed to get built. No one at Hawthorne, save Walker, understood how to read the blueprints, though. Walker had picked up the skill in peeking over his father's shoulder all those years.

“I would always tell everybody, ‘It's my father’s gift,’” Walker said. “He was one of these kinds of people that could build anything from junk."

Not only could Walker understand blueprints, he could draw them as well. 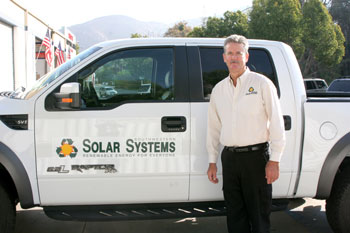 Clint Walker is the co-founder and president of Southwestern Solar Systems. Staff photo by Laura Hansen

Sometime later, Caterpillar sent a design engineer from its Peoria, Ill. headquarters to San Diego in a search of qualified engineers able to help in the building of a new dynamometer testing facility it was planning. Knowing that Walker could at least read blueprints, Walker's bosses elected him to be that help.

The month-long assignment turned out to be a life-shaping one.

Unknown to Caterpillar, most of the prints for the facility were incorrect. There were discrepancies in dimensions. Load differences within the plans didn't make sense for what the project was trying to achieve, Walker said. The welding was out of place. But no one knew until Walker had a look.

“To me, it was obvious,” Walker said.

Caterpillar then gave him the responsibility of correcting the prints. For about six months, Hawthorne provided just about anything Walker requested, and he helped throughout the building process.

At 18, Walker was earning a higher wage than the recent college graduate hired to market the new facility. But the construction downturn of 1980 hit Hawthorne, and later Walker, when the company was forced to lay him off after retaining him for as long as it could.

Then 20 years old, Walker reverted to his old hobby of rebuilding old cars, performing work out of his garage for cash. Confronted with more work than the garage could handle, Walker sought a business license, and was rewarded with a cease-and-desist order. Looking to operate legally, he leased out space on his father's business property.

Just as with reading those blueprints, he just made it work.

Within two years, he outgrew that space as well. His painter suggested investing in a paint booth, which he did. After purchasing it from the referred manufacturer out of Los Angeles, the booth was dropped off at the shop and disassembled.

In one weekend's time, Walker and one helper built the booth, wired it and had it running with no prior knowledge of how to do so, much to the amazement of Walker’s painter one Monday morning.

“It was never anything I planned to do,” Walker said.

The solar business, owned by Walker's wife, Rosanna, was started in 2009, when Air Management Systems was surviving almost entirely on the renewable filters. Other work handled by the company, though, such as providing manufacturing equipment in compliance with air pollution regulations was struggling.

“But I never wanted to do that to my guys,” he added.

Responding to a cold email he had received from a solar vendor, Walker dipped his toes in solar with a trip to Arizona for a seminar on solar technology.

“The light went off in my head,” Walker said. “The reality of energy is that, if we can get it from something like the sun -- it's not going to go away, because if it does we’re dead anyhow — it’s going to be the energy that the oil companies and nuclear reactor companies are really not going to be able to compete with.”

Southwestern Solar Systems' first solar energy system installation came at a net loss of around $1,500 to the company.

But the difficulty earned Walker self-confidence in a new endeavor. He then went on to build a two-axis sun-tracking system at his own home, gaining him recognition from area residents living on large parcels.

After receiving bids from a couple of other companies, one customer came to him, requesting a quote on a large 22-kilowatt job. It would be Walker's fourth solar installation. An up-front quote was of no matter to the customer, as long as plans showed the system to be as hidden as possible among the landscape of gullies and large granite boulders.

Still relatively new to the game, Walker insisted on quoting up front. The average price of a system per watt at the time was about $8, Walker said. He ended up performing the job for $8.25 per watt, barely covering his costs.

“I should have slashed my own throat,” Walker says now in jest.

But it was enough to keep the business moving forward.

Making up for lost profit on that job, Walker benefited in other ways. After submitting documentation of system energy production, the California Public Utilities Commission told him they needed to monitor his jobs. The systems, the PUC said, were too efficient on paper for the documentation to be accurate.

When the PUC came to monitor Walker's jobs, it not only found that his jobs were exceedingly efficient compared to the norm, but it also recognized the work through a couple of awards to the company, Walker said.

“It was engineering, all the way,” Walker said.

The company only buys U.S.-made products for its installations, and recently switched its solar panel provider to Solar World -- a German-owned company that manufactures its product in Oregon, after finding out panel manufacturer Siliken was moving its manufacturing operations to Mexico.

“I can buy foreign solar panels for probably 20 percent less. I'm not gonna do it,” Walker said.

With experience and recognition behind him, and still armed with a knack for engineering, his list of clients has grown. He's now qualified to bond projects as large as $1 million, and recently completed a project for San Diego County at Sweetwater Summit near the Sweetwater Reservoir.

But at 10 employees, Walker doesn't want to get much bigger. His work facility -- housing both companies — is paid off.

“I enjoy my life,” Walker said. “The only driving force for me today is to keep my people working.”