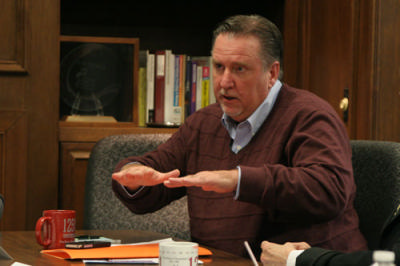 The housing market took a turn six months ago with increased demand leading to higher prices and competition for inventory, according to a group of real estate professionals at a roundtable discussion hosted by The Daily Transcript.

“About six months ago I saw a sea change take place in the buying mentality,” said Alan Nevin, principal at The London Group. “All of a sudden, what we basically had been waiting for, for maybe five years, all of a sudden came to the floor, and I have no clue what cause it to happen. But somebody turned on the light switch.”

“We’re in the lot business, so we’re land development and we sell lots to builders. And it came out of nowhere, almost overnight. Six months ago there was a huge increase in activity of builders buying lots, and suddenly there were multiple bids on packages. Suddenly, there were bids above prices that seemed justified by today’s home prices,” Aden said.

That increased demand lead to decreasing supply, creating an issue of low inventory across San Diego County. Nationwide, Nathan Moeder, principal at The London Group, said finished lots were being snagged from people who were holding the lots for three or four years. The existing supply of lots is disappearing and there’s no new supply coming out immediately because of the time it takes to entitle and improve those lots.

Restaurants are also running out of space, said Mike Spilky, president and principal at Location Matters.

“The leasing activity has been immense, but it started a lot earlier for me, in mid 2011 — that’s when I saw an uptick in leasing activity and it has been robust throughout the whole year,” Spilky said. “Our business has been up probably 35 percent and we’ve brought great restaurants to town, and now we’re pretty much out of space for great locations.”

Commercial real estate does not typically come back before residential, Nevin said, but the retail inventory has been so low that companies were “waiting to pounce.” Spilky said the large chains that wanted to expand paused, and the “mom and pops” and smaller emerging restaurants saw an opportunity for growth in 2010

“That’s why you see all these great, new restaurant concepts that might have 20 locations or 10 or five come into our market because they were able to get into our market,” Spilky said. “Well, now chains are back and landlords are demanding those chains because it’s the same cycle that always occurs. The banks want to see the credit and the landlords want to see the credit so they’re signing leases with corporate Buffalo Wild Wings and all the franchise brands are taking all of the space again.”

Alex Rojas, broker and owner of Shorepoint Real Estate, said his company purchased small, four-unit properties a couple years ago that no one wanted, and now plans to have four sites ready to be built out next year.

“And when we’re done, the demand is really high,” Rojas said. “We finished a four-unit project, all the prices on those four units were a lot higher than any of the recent sales by a good margin, and we sold them. We closed escrow all in about 65 days. The demand was there and it sold off really quick.”

Marty Conrad, regional vice president at Coldwell Banker Residential Brokerage, said there are still challenges in the next year but there’s no longer a worry that houses are going to continue to depreciate.

“That worry is gone, at least in my perspective it is. We think the market has at least stabilized, if not improved, in most of the areas we’re working in,” Conrad said.

Donna Sanfilippo, president of the San Diego Association of Realtors, sponsor of the roundtable, said she noticed the prices really increasing about six months ago, but that was forced by the low inventory.

“When you have less than a month and a half of inventory, you’re going to realize that there are going to be a lot of offers. There’s a lot of pent up buyer demand and it’s pushing values, maybe artificially,” Sanfilippo said.

The increasing prices may have kept some short sales off the market. The Mortgage Forgiveness Debt Relief Act is set to expire on Dec. 31.

Without it in place, debt forgiveness results in taxable income. The expiration of this act was expected to result in more short sellers coming on to the market to complete the process before the Dec. 31 deadline.

“We should have at this point a few months ago, should have seen a pretty dramatic increase in short sales for people who were faced with it knowing that this was going to sunset — the taxing on losses — and we didn’t really see any dramatic increase in short sales,” Sanfilippo said. “I think it’s working its way through the short sale cycle and I think the appreciation has a lot to do with it.”

Nevin sees the expiration of the Mortgage Forgiveness Debt Relief Act as the “one black cloud.”

“That could mean an enormous number of people having to file Chapter 7 or Chapter 11 because, if they lose their house and they’re $200,000 underwater, that comes back as ordinary income, which automatically jumps them into a higher bracket and they will automatically have to file a chapter action,” Nevin said.

Inventory will come back when there’s a faster, easier process for short sales, Rojas said, and those who are underwater, not paying their mortgages and sitting in their homes account for the county’s “shadow inventory.”

Nevin said investor-owned homes won’t come back on the market for a few years. The investors purchased the properties with a plan in the three to five year range, Nevin said, and the county is only going into the second year of that.

“They’re holding these and because rents are really good and the vacancy rate particularly on detached homes is below a half of 1 percent, the investors don’t feel any particular obligation to stick them back on the market now,” Nevin said.

The pressure on prices from low inventory is expected to last another 24 months and the county is about two-and-a-half to three years away from a “meaningful increase” in inventory, Moeder said.

With apartment occupancy rates in the high 90s, Nevin said more people are going to come on to the market and the county will probably see between 35,000 and 40,000 resales this year.

Rojas said one of his clients purchased a property and had planned to have 37 rental units, but is now going to sell those units because they reached a certain price point.

The future of San Diego’s housing market may look different as a result of the county’s demographics. Kelly Cunningham, economist and senior fellow at the National University System Institute for Policy and Research, said San Diego is experienced an outmigration of residents.

The population is growing due to births, international residents have increased but net migration is negative, he said.

Both the white and black populations are leaving San Diego, and the Hispanic population is increasing.

“We’re growing because of children, so that doesn’t put a whole lot of pressure on expanding the home base or residential base, at least immediately. You can kind of absorb that population a little easier,” Cunningham said.

The “hollowing out” of middle class jobs will also change the dynamics of the housing market, Cunningham said.

The higher wage groups will still be able to afford coastal properties and keep those areas in demand and the low wage sector jobs are also up, but “whatever is affordable in San Diego is probably fairly soft,” he said.

Almost all of Aden’s future planning in the master plan communities is higher density with more urban development, he said.

“It concerns me greatly because the local jurisdictions like it because it’s smart growth and you can have transit, but I’m not sure that’s what the buyers want,” Aden said. “My perception is the average person still wants to buy a single family home with a backyard, and yet that’s not what’s on the boards for the future.”

The cost to build the house and the fees combine to bump prices against the single-family prices.

As single family prices “continue to dissolve,” Aden said there will be more of a variety of attached products on the market.

About four years ago, Nevin said he did an analysis by ZIP code comparing SAT scores with the loss in home value, and found that the really good school districts didn’t have a big drop in prices and also bounced back the fastest.