Steve Bernstein got into banking by accident.

He earned his degree in political science and psychology from San Diego State University and went on to work for a councilman who was also deputy mayor.

“Honestly, I wasn’t making a lot of money. I went on a bunch of interviews just to see what was out there,” Bernstein said.

He took a job at a company by Western Financial because he liked the hiring manager — “I thought he could teach me something.”

And teaching others is what Bernstein now does as the business banking president for the Southern California region at Wells Fargo. In fact, that hiring manager works for Bernstein today. 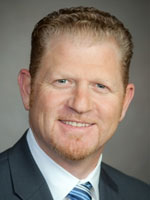 He worked as a business deposit consultant for about three years before he moved into a management position.

“I’m personally wired – helping other people be successful is kind of like my trophies. I just have more satisfaction helping others be successful than I ever did having pure success myself. And I can say that because I was the No. 1 banker at the time and decided to leave that to get into management,” Bernstein said. “I think making a positive impact on people’s lives is really what it’s all about. You don’t leave this world with the car and the clothes and the titles. You leave, hopefully, some type of legacy or an imprint on somebody or something that helps others be successful.”

Leading selflessly, doing things with good intention and managing to people’s potential and opportunity rather than managing to numbers is what Bernstein said makes a successful manager.

“You find out what their motivating factors are, why they’re here, what they want to accomplish and, as a leader, you do whatever you can morally and ethically to help them succeed — whether that’s education, whether that’s observation, inspection,” Bernstein said.

Bernstein asks for his team members to have positive attitudes, a strong work ethic and an aptitude to do the job by continuously growing with the business.

He has worked to broaden his lens by attending the College of the Credit, but Bernstein said his job is “to broaden the lens of my team members and really show them what is possible,” which he said is his challenge at Wells Fargo, but more of an opportunity.

Bernstein’s success starts and ends with his solid foundation at home, he said. His wife is a teacher who “goes to work every day to impact the lives of our children and our next generation. And that kind of instills in me why I come to work,” he said. His parents also instilled in him good values and a strong work ethic, he said, which helps him be a selfless person who does things because it’s the right thing to do. Bernstein has always been a “team guy,” even from when he was playing baseball growing up. Bernstein also heads Wells Fargo’s volunteer program in Southern California.

Since joining Wells Fargo, the bank has gotten bigger, including its acquisition of Wachovia.

“When you look at ways to make decisions, your purpose here, what your real ultimate goal is — it’s been pretty consistent. Are there adjustments here and there? Absolutely, because if you’re a smart business, you make adjustments when things are thrown at you — whether it’s economic changes or product enhancements or technology,” Bernstein said.