Padres president keeps faith in a team, city that kept faith in him

For Tom Garfinkel, president and chief executive for the San Diego Padres, 2012 was a year that could have made certain men lose faith.

The first half of the season was a disappointment — the team was looking to answer questions on TV contracts and its prospective new ownership. There were even specific questions about whether any new owner would retain Garfinkel, as it’s not uncommon for new owners to bring in their own people.

But as team president since 2009, Garfinkel — holding a bachelor’s degree from the University of Colorado, Boulder, and an MBA from the Stephen M. Ross School of Business at the University of Michigan — didn’t come to the Padres to build his resume, he said. He came to help build a great organization and a life for his family in San Diego. 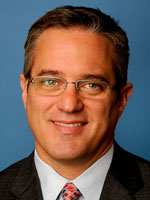 “Fortunately, the new ownership group, in keeping key leadership in place — Josh Byrnes, Buddy (Black) and others — there is stability, there is consistency,” he said.

Building an era of stability was a focus for Garfinkel in 2012, both on and off the diamond. He has no intention of scaling those efforts back.

He said the team is now working to keep as much of its pool of talent in place. Padres third baseman Chase Headley, for example, might have been prime for a trade in 2012. But the team avoided the temptation and held on to him as he continued producing numbers that eventually earned him Silver Slugger and Golden Glove honors.

After an abysmal first half in 2012, the team won 48 of its final 84 games — a winning percentage of .571, enough to rival for one of the best second-half Major League Baseball efforts. By retaining young players like Cameron Maybin and veterans Carlos Quentin, Huston Street and Headley, the Padres are trying to show that its strategy of late is to build something sustainable, Garfinkel said.

“I think there’s some real positive momentum from the end of this past season that we hope and expect to continue into the years to come.”

Garfinkel also worked for stability within the community. In 2012, the team was recognized by the SportsBusiness Journal as having MLB’s best ticket sales and service team. The new membership program for season ticket holders provides 12 months of benefits, and a new look at how to engage the public has the team offering at games foods from fans’ favorite restaurants, while there are plans to hold special events at the stadium in 2013, like concerts featuring local bands, all year long.

The team also began in 2012 a Little League program, providing more than 11,000 jerseys to 800 area teams, allowing the leagues to use funds on other priorities, like field upkeep and concessions.

“It impacted a lot of kids and a lot of Little Leagues throughout San Diego,” Garfinkel said.

Garfinkel said the program will be expanded in 2013 to cover more than 14,000 children.