Anthony Pico has spent 26 of the last 30 years as chairman of the Viejas Band of Kumeyaay Indians.

He has had a profound impact on not only the governance of his tribe, but also on the Viejas Band’s economic growth and prosperity. He was a driving force in the landmark California ballot initiatives that enabled tribes to engage in gaming on tribal land.

“We’ve seen way more change in the last 20 years than in the previous 10,000 years we’ve been here,” Pico said of his tribe. “It’s been difficult making so many changes in so short a time, but because of the courage, initiative and vision of my people, their tenacity and work ethic, we have certainly risen to the occasion, and are looking to the future.” 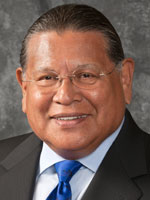 The tribe’s business operation, Viejas Enterprises, includes the casino in Alpine, an outlet center, two RV parks, and an entertainment and production company.

While he’s not involved in the day-to-day operations of the businesses, Pico facilitates the decision-making process within the tribal council, providing leadership and vision.

“We look at things a little bit differently," Pico said. "It’s always ‘we, us and our,’ rather than ‘me, mine and my.’ That’s the big difference. I lead by consensus.”

In addition to his role as chairman of the tribal council, which Pico likened to a city council or board of directors, he also serves on the tribe’s Finance Committee. The committee oversees and provides recommendations on the tribe’s business enterprises and future economic development.

“Because of the recession, we’ve been affected as much as everyone else. It’s been very challenging,” Pico said. “So the tribal council, with me as its spokesperson, we are preparing ourselves for when the economy gets better.”

Pico and the tribal council have created a five-year strategic plan that involves investing back into the casino.

Viejas has added more advanced slot machines, re-created the buffet and continues to refurbish the casino’s interior. The tribe is also building a 128-room hotel adjacent to the existing casino — which is scheduled to open in late March — with a new parking garage slated to open in the fall of 2013.

“We believe the hotel is going to be so successful that the day we open, we’ll start planning another tower,” Pico said.

As the economy slowly picks up, so are revenues for Viejas Enterprises. Profits are invested back into the tribe, to provide services such as fire, education, water, emergency medical and trash pickup for the roughly 300 tribal members that live on the reservation.

Beyond basic services, the tribal council is focused on sovereignty, cultural preservation, and providing employment and educational opportunities.

In the coming years, Pico expects profit margins will grow, allowing the tribe to add to its cash reserves. The Viejas band can then take a serious look at further diversification.

“It’s all geared toward a time when we will in a very significant way be very educated, and be able to protect our cultural resources, which are very distinctive to Native Americans,” he said. “We have a five-year plan we’re very proud of. We’re righting the ship, due to the stunning blow because of the recession. We’re looking forward to the country moving out of the recession. As the country does, so do businesses, and that includes us.”