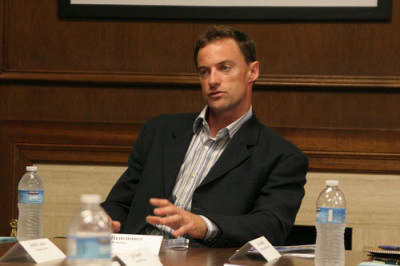 Jennifer Tucker Klein, assistant vice chancellor of institutional research and planning at Brandman University, is a whiz at data mining and predictive analytics. But with that knowledge — that Web scrapers and robots are out there, taking note of a person’s online persona — comes a bit of paranoia.

“The fact we have all the technology and algorithms that use your data to figure out where you are going to buy, what you are going to do and what kind of person you are ... there’s a big concern about what the information is used for,” Klein said.

A group of technology experts gathered at a recent roundtable sponsored by Cari.Net Inc. at The Daily Transcript to discuss the right way to handle big data.

Klein is scared that the level of intelligence about a person could become so sophisticated that they could be a prime target of identity fraud.

The information collected about users on its recruiting website Climber.com and Wine Battles, akin to March Madness for wine, is meant to help, not hurt.

“We touch a lot of people and manage a lot of data," said O’Brien, whose Internet properties touch 11 million people a month. "We’ve become predictive about what people want, with jobs and wine."

One trend is younger users on Climber.com are willing to dispel more of their career history, individual successes and hobbies on their online resumes.

"It’s about overall personality. They might have how they play golf or coach soccer. Largely that is to make them a person and give them humanity," O'Brien said.

Dana Love, senior vice president of Infolob Solutions Inc., has focused on big data solutions and cloud computing for the past 15 years.

“The fun part of big data is being able to answer sophisticated analytical questions that before we guessed at,” Love said.

Data proves that people with AOL email addresses tend to be older and don't buy as much online.

“We don’t want to market to AOL people. We isolate those people out as a segment. We don’t waste ad dollars on them,” O’Brien said.

David Bruemmer, vice president of 5D Robotics, takes data mining a step further in its mission to provide intelligence for a broad spectrum of military robots. His goal is to make data mobile, which means turning information into action.

The company builds a 3-D video game environment for soldiers on the move, helping them detect IEDs and land mines.

“If we have conquered information age, the next step is the ability to actually do things,” he said.

That begins with simple steps, like the ability to robotically open doors.

“The grander question is how to use moving systems as what I would call ‘agents of intelligibility,’" he said.

When data is being collected from humans, however, security is a top concern that technology companies need to keep in mind.

To improve users’ sense of trust and control over their personal information, privacy levers need to be simple and up front, said Liz Gasser, vice president of business operations at business incubator Qualcomm Labs.

From a marketing perspective, securing users' personal information is a smart move.

“Demonstrating respect of that helps build trust,” said Gasser, who takes early-stage technology from the research and development stage to commercialization.

One of Qualcomm Labs' latest projects is Gimbal, a mobile context product that enables content providers and developers to deliver a more personal experience to end users in real-time, based on their location, interests and situational context.

"We try very hard to preserve the notion it’s your data and it stays on your device," she said.

As people sharpen their digital footprint through online activity, they will loosen up to the idea of a cyberspace profile, O'Brien predicted.

“As we mature as a society we will become more OK with that creep. It’s just natural evolution,” O’Brien said.

Treating privacy as a joke is the Mark Zuckerberg approach, notes Mike Dowdy, vice president of sales at Cari.Net.

“That’s why people are apprehensive putting information out there. They know he has tons of data for 1 billion people,” he said.

Bruemmer says people don't care about security as much as one would think.

“They care about interoperability — the ability to use information across all their devices,” said Bruemmer, referring to the easy exchange of music between Apple devices.

Despite there being so much information in the cloud, there is surprisingly little interoperability between companies, he notes.

"It is certainly possible that your medical information could be shared," he said, "Why do you have to fill out the same information every time you go into doctor’s offices?”

“He or she who owns data, certainly in the health care world, is in charge," he said.

The goal is to get health systems to share data in a way that does not compromise individual objectives, which means a Scripps patient could go to Sharp without starting from scratch.

Gehring said that health care systems want to exchange health records, citing the example of potentially lethal drug interactions, but no one wants to be the one that hands the data off to someone else.

“No one wants to have the data stay resident anywhere except in their own world. They will give you the data — you can play with it, but you can’t keep it," he said.

Some cautious physicians aren't moving patient records to the cloud, creating another roadblock in the quest to innovate health care.

“When I talk to doctors, they are scared about being sued — the cloud in the sky doesn’t sound safe to them. They say, 'When I don’t have to worry about lawsuits we can have a conversation,'” Dowdy said.

Dowdy defends the cloud, calling it a secure way to store information.

The cloud can go down, which was seen recently with Amazon Web Services and Google, as well as when Superstorm Sandy hit, but the data stayed put.

“If data was stored in a traditional environment, there would have been a ton of data lost," he said.

The downside of the cloud, Love points out, is it aggregates companies’ information into one location.

“That makes it a target-rich environment,” he said.

Dorthe says it's time to have new standards on how to define security in the cloud.

“We have federal regulations on what makes a bank safe — we don’t have that for cloud computing just yet,” Dorthe said.