New courthouse: 'too big to fail'?

I previously published a column condemning the planned construction of a new 20-story San Diego County Superior Court building to be located on a state-owned parcel bounded by C, B, Union and State streets.

The result was a drubbing by those committed to its construction on these pages and through judicial back channels.

How could I, a former judge who served more than a decade in the 60-year-old downtown asbestos-infested building, object to a new facility fully funded (“free money”) by the state of California?

This building’s proponents include the chair and members of the judicial advisory committee that worked with the San Francisco architect (no architects in San Diego?) on the design of the forgettable structure.

Advocates were quick to get their noses out of joint by anyone who questioned their “baby.”

They use terms like “too late to stop,” “too big to fail” and “no alternatives” to defend their efforts. 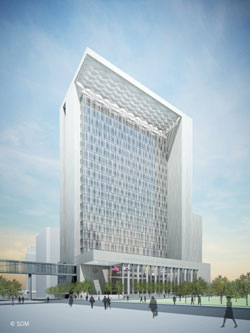 The local judicial committee is backed up by downtown commercial interests who wish to foster business in the Central Business District (CBD). One way to do that is to make it necessary for litigants from around the county to come to the CBD even though there is inadequate parking downtown.

Add the construction industry and their affiliated unions and project proponents make up a potent advocacy cabal.

Opposed to them are others who see the project as ill-designed and misconceived, a “yesterday solution” for tomorrow’s court needs.

So, what is the problem with the current design? Don’t we need to replace the old court house at 220 W. Broadway?

Yes, of course it needs to be replaced, but with what?

First and foremost, the project provides no additional parking for litigants, jurors, or police officials. That is irresponsible.

Second, I am a long-time advocate of 24/7 arraignment departments at each major criminal court facility.

A strategic flaw in our so-called “criminal-justice system” is that it is not “systematic.” It is a fact that most crime occurs during the evenings and weekends.

While the police officers are enduring their greatest workload, their chief officers, the prosecutors, defenders, and the judiciary (except for a few duty officers) are off at the movies or home in bed leaving the field officers with few choices: arrest into an overcrowded jail system; citation and release; or to just ignore problems because apparently the system does not care.

The officers should not be put in this impossible position.

There are dozens of other reasons to operate a 24/7 court that would take up too much space.

Since there is no 24/7 arraignment facility, the proposed facility is flawed even if that was the only problem.

As initially proposed the project price tag was around $1.2 billion.

Midway through the planning, the state announced a substantial reduction in available funds.

My sources say that the local court management responded by proposing a stripped-down project of some $600 million.

Gone from the project proposal was the money to tear down the old court house. Instead of new useable space, the CBD would be saddled with another eye sore like the abandoned California Theater. The proposal is to board it up and fence off the old building. At least our burgeoning homeless population will have a new headquarters.

The reduced project also eliminated the tunnel from the jail to the court. Since the trip is only one block, it is unlikely that the sheriff would bus dangerous inmates that far. Walking them back and forth on the surface streets creates a threat to the safety of San Diegans.

An even more fundamental question is raised in the Environmental Impact Statement under “project alternatives.”

The downtown court location is only one of four major criminal courts/jail complexes in the county.

If the state has more than a half-billion dollars to spend on San Diego courts, they should have first analyzed the workload through a facilities-allocation model previously provided by SANDAG for locating our police substations and fire stations.

According to the EIR, no such analysis was made.

The question is basic. Where is the workload occurring?

This is the very reason that as a legislator, I created the East County and South Bay Superior Courts because those areas, just as with North County and Downtown had plenty of workload to justify a proximate superior court instead of forcing everyone into downtown San Diego.

One final beef with the project is that minimal space has been allocated for commercial or related government tenants as we provided in the beautiful Hall of Justice.

It was the late Ernie Hahn that educated me with the suggestion that the courts include tenants that would not only be a comfort to court participants but provide an ongoing stream of revenues to support the facility.

This project includes little such space on the specious and unexamined excuse of “security.”

Airports throughout the nation with severe security problems are chock-a-block full of commercial and other tenants that pay for the airport. Who can imagine airports without vendors?

Certainly for the financial viability of the courts, the architects and project sponsors could figure out how to handle “security” through background investigations and architectural features.

All in all, the proposal is a bad one. It is not too late to stop it and consider the legitimate concerns of project critics.

The financial condition of the state and the courts are too precarious to make this serious mistake.

Stirling, a former U.S. Army officer, has been elected to the San Diego City Council, state Assembly and state Senate. He also served as a municipal and superior court judge in San Diego. Send comments to larry.stirling@sddt.com. Comments may be published as Letters to the Editor.
User Response
0 UserComments