More companies opt to outsource IT 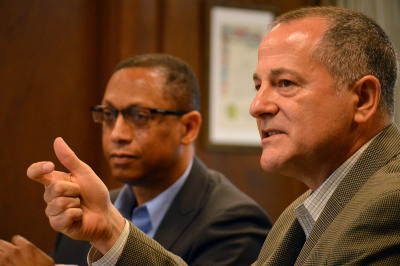 Information technology is, at some point or another, a key enabler for just about any organization today -- whether it’s a startup or Fortune 500 company.

That’s the consensus of a group of technology executives who recently gathered at The Daily Transcript for a roundtable discussion sponsored by American Internet Services.

“Even a mom-and-pop shop has some kind of Web presence. It’s really part of the DNA of the economy," said Tim Caulfield, CEO of AIS, a data center and cloud services provider.

There are a lot of different components that go into IT, depending on what a company is trying to accomplish.

AIS, which sits on the data center and infrastructure side, tries to take the burden away from end users by simplifying some of those complexities.

“Shifting the economics of IT, from people having to go out and own and operate technology, to get it as a service,” he said.

One company that's handed off its complex infrastructure piece to AIS is Dataskill Inc., a 32-year-old business intelligence and predictive analytics company that has been headquartered in San Diego since 1984.

“The actual IT infrastructure is not something we do, so it makes sense to outsource the IT layer,” said Nigel Hook, president and CEO of Dataskill. “Our focus is on the data, rather than the IT.”

IT acts as a supplier, or the car, whereas Dataskill provides the data, or the fuel, to help companies become more profitable.

A misconception of IT is that it is a “core” component of a company's business.

“When you peel it back, it’s not core -- unless you are a Yahoo or Google. It’s an enabler. How can technology be more efficient for you as an enabler," Caulfield said.

When looking at infrastructure as a cost, anything a company can do to drive down that cost over time is important. Over the last 10 years, it’s become more affordable for companies of all sizes to outsource IT.

“You want to make investments in things that differentiate you from competitors,” said Max Carnecchia, president and CEO of Accelrys, a scientific software company.

During the downturn, companies that previously were able to afford their own IT suddenly had to take a look at where they could cut non-core expenses.

“They said a lot of this isn’t core for us, i.e. we can’t afford that data center layer,” Caulfield said.

Caulfield remembers the state of financial institutions before the economy crashed.

“At that point, most had some portion of their IT with a service provider but were still doing the bulk of it themselves,” he said.

Most IT was still handled in-house and in their domain because of issues of ownership, control and security.

In better times, Lehman Brothers built a data center in the U.K. for $250 million.

"I built one across the parking lot in the same type of building. It looked exactly the same from the outside,” said Caulfield, who paid $80 million to build the same-sized site while working at a previous data center company.

Lehman, as a single-source provider, was convinced every piece of technology in its center needed to be “Cadillac"-calibur quality, Caulfield said, or the best and most expensive. Turns out, that wasn't the smartest move.

When Lehman went under, Caulfield was not interested in taking over its pricey data center.

“We'd have to rip everything out they did to put in infrastructure that was more tailored to the masses,” he said. "That was a case where people were making bad choices because they had the money and no one told them to be in check. They literally wrote the check instead.”

The financial community has learned from its mistakes and now tends to lean toward a service provider environment. However, as more companies trust IT providers with their secure data, they still remain paranoid about keeping it safe.

“Sometimes our security has to be better than the client's because they require it,” he said.

His company helps improve document-based communications, and when it comes to implementing technologies that require high degrees of security, he will scour for experts in the field.

In dealing with the Department of Justice, for example, there are specific protocols Hershey must meet.

“It makes sense not to disguise ourselves as experts. We contract it to a person that can understand that,” Fischer said.

For education, outsourcing is not always the way to go. San Diego City College used to have a third-party IT services company working for the college. Now, some of those people have been hired as part of its main in-house IT team.

“High school students come to us with the expectation that they think all the gizmos I can access will be on an even higher level here at college,” he said.

His goal is to create “digitally literate citizens.”

“We have some extremely technology and knowledge-thirsty students,” he said.

As faculty and students jump on the “BYOD” or “Bring Your Own Device” bandwagon and carry more iPads and Android devices to class, that means broadband must cooperate.

“The challenge now becomes what type of broadband infrastructure can support that,” Ewell said.

Its limited hardware budget impacts how wide it can cast its overall broadband net.

"It's always an issue for us because it's never enough," Ewell said. “We are trying to catch up to demand and create as generic a network as we can. Taking on challenges as they show up."