Subcontractors to bid on work for new downtown Central Courthouse

By JENNIFER McENTEE, Special to The Daily Transcript
Thursday, May 16, 2013 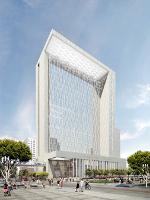 The new Central Courthouse planned in downtown San Diego is the largest project funded under a state court construction program.

Friday is the deadline for bidder prequalification for the new downtown San Diego Central Courthouse, a 22-story, 71-courtroom endeavor that is the state’s largest courthouse construction project. The construction site is on 1.4 acres encompassed by West C, Union, West B and State streets.

The timeline for subcontractor bidding is still uncertain, as it’s subject to passage of the budget act for fiscal 2013-2014, according to Teresa Ruano, supervising communications specialist for the state’s Administrative Office of the Courts.

Assuming the budget is passed as anticipated on July 1, bidding could begin then, Ruano said.

The construction manager for the Central Courthouse project is Rudolph and Sletten Inc., a general contracting firm based in Redwood City, Calif., but with a regional office in San Diego’s Sorrento Valley. Rudolph and Sletten is conducting local outreach to ensure that 30 percent of the labor force comes from San Diego County. The Administrative Office of the Courts is also working with the contractor to reach out to potential subcontractors that are small, emerging, and minority- or disabled veteran-owned.

Up for bid are all major construction trades, as well as bids for furniture, fixtures and equipment.

A bond sale this fall will finance construction, with construction expected to begin in December of this year and run through June 2016, Ruano said.

The project was classified as a “critical need” in the judicial branch’s capital-outlay plan.

Still, the Central Courthouse construction project is smaller in scale than originally proposed. Compelled by the state’s fiscal crisis, the Judicial Council’s Court Facilities Working Group mandated several rounds of cost reduction to this and two-dozen other court construction projects. The latest cut in March of this year was the removal of a planned tunnel that would have connected the San Diego Central Courthouse to the Central Jail; state officials estimate cost-cutting efforts have trimmed $50 million from the project budget.

Justice Brad R. Hill, chair of the Court Facilities Working Group, said then, “We don’t have the cash upfront required to move forward with this aspect of the project.”

Whether the tunnel will be added back into the plans sometime in the future is unknown, Ruano said.

The previously authorized budget for the 704,000-square-foot San Diego courthouse facility was $620.117 million, but that number hasn’t been updated to reflect the omission of the tunnel or the impact of the pending state budget, according to Ruano.

The architecture and engineering firm on this project is Chicago’s Skidmore, Owings & Merrill LLP. Distinct features of the planned courthouse include a top-floor sun-shading canopy designed to reduce the building’s cooling needs, public corridors with energy-efficient radiant heating, an outdoor public terrace, and parking lot amenities for bike commuters and electric vehicles. The sustainability features of the courthouse high-rise are expected to qualify it for the U.S. Green Building Council’s LEED Silver rating.