The Central Library’s dome is a remarkable addition to the city’s skyline. Photo courtesy of Steve Simpson Inc.

Standing like a beacon on the city's horizon is the Central Library's gleaming and iconic dome. It is already coming to represent San Diego and is being integrated into publications, advertisements and photos. The specific dome design was inspired by the domes in Balboa Park. At night, the 255-foot-high dome anchors the cityscape with a soft and welcoming glow.

Domes have long symbolized enlightenment and civilization. In our culture, domes also have come to represent democracy. “This dome stands as a symbol of the city's commitment to literacy and learning," said architect Rob Wellington Quigley. At 143 feet in diameter, the Central Library’s dome is larger in size than the U.S. Capital (135 feet), comparable to the Pantheon in Rome (142 feet) and the Doma in Florence (149 feet), and smaller than St. Peter’s Basilica in the Vatican (195 feet). 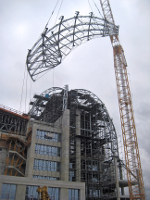 The first “sail” of the dome being raised by a crane. Photo by San Diego Public Library

This dome is a one-of-a-kind engineering marvel, and is fondly referred to as the “Dome of Knowledge.” But this amazing structure is not actually a dome. It is constructed from eight overlapping steel “sails,” with the tallest one at 113 feet. Together, the sails constitute the spine of the dome. The sails each weigh approximately 17 tons. They were constructed offsite in Arizona, transported to San Diego and assembled onsite. Two huge cranes were erected to lift the sections into place. Once in place, they were welded together. Covering the sails are 1,500 aluminum panels weighing 32,000 pounds to shade the glass reading room below.

The lattice work design of the dome doesn't look finished and it never will. Like the human spirit that thirsts for knowledge, the dome is designed to be in the perpetual act of becoming. "It is intended to stand as a paradox, grand yet accessible, familiar yet unique, comforting yet provocative,” said architect Rob Quigley. “It is permanent yet kinetic, and ever-changing to the sun and the sky and clouds.”