Ground was broken on Tuesday for the new Copley-Price Family YMCA in City Heights, “where cultures and worlds come together to build community.” The $34 million facility will replace the old Copley Family YMCA to serve Mid-City San Diego communities.

“How appropriate that we have the largest Y facility in the system right here in the heart of San Diego,” said City Councilmember Marti Emerald.

Emerald and Interim Mayor Todd Gloria were among those who spoke at the groundbreaking ceremony.

The 53,000-square-foot, LEED certified facility will include indoor and outdoor pools, a gymnasium, child care centers, a teen center, computer lab, three group exercise rooms, a 7,500-square-foot fitness and wellness center, demonstration kitchen, outdoor soccer arena, and a parking garage with room for bicycles and 300 cars. The new YMCA will be able to serve more than 16,000 people, while the old facility served about 8,500 residents annually and 1,000 children daily through child care and before and after-school programming.

TFW Construction, which also donated to the project, has already begun building the facility, scheduled to be finished by November 2014. This will be the third YMCA the firm has built. Kenneth D. Smith Architect & Associates designed the new facility.

“It could serve as a catalyst for redevelopment on the boulevard,” said Dean Smith of Kenneth D. Smith Architect & Associates. “I think it could create a more dynamic atmosphere and draw businesses to El Cajon Boulevard.” 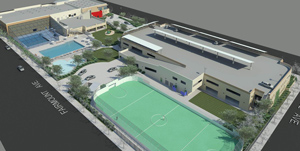 Civic San Diego secured $23 million in New Market Tax Credits for the YMCA, which were then bought by US Bank to provide a low-interest loan of $5 million, which will be paid off over seven years. The YMCA hopes to raise an additional $1.6 million to create a $4 million endowment to provide YMCA memberships to those who can’t afford them.

When the 56-year-old Copley Family YMCA on Landis Street could no longer accommodate the large interest of the community, the YMCA originally planned to expand the old facility. In a surprising turn, Price offered his newly acquired property unsolicited.

“We would like to see El Cajon Boulevard become a major thoroughfare and a commercial center and a really active place again,” said Price, whose foundation works to revitalize the City Heights area. “This is the most exciting project [my family] has ever been involved in.”