"You know we poor artists have to show ourselves in society from time to time, just to remind the public that we are not savages," Oscar Wilde wrote in "The Picture of Dorian Gray."

This San Diego native has been supporting herself with her art business since college, was the featured artist at this year’s North Park Festival of the Arts, and was recently commissioned by two local hotels for large lobby paintings.

"The first painting I ever sold, sold for $5,000 — and that's pretty rare," Stieber said at her studio in a shared workspace on Park Boulevard. "So at that point, I was almost in this Catch-22 where I wanted to continue selling work, but I couldn't lower my prices very much."

So she didn't. Stieber's original oil-on-canvas works range from $2,400 to $13,000, depending on size and technicality, with smaller giclees (high-resolution digital prints) priced in the hundreds. Stieber said her pricing system is roughly based on a $2 per-square-inch rate, though she sometimes lets paintings go for less than the amount on the tag.

"Art is such an emotional purchase that I realize that that is such an important part of making a sale," she said. "If somebody feels so, so, so connected to a piece, and maybe they need the piece to be a little bit less expensive and it's going to be so meaningful to them, then that gets me and I'm happy to let it go for less. It really depends on the individual, the buying experience." 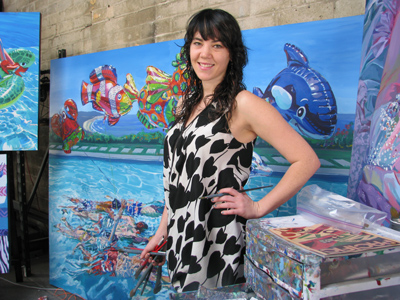 Sarah Stieber has been supporting herself with her art business since college, and was recently commissioned by two local hotels for large lobby paintings. Staff photo by Katie Gronendyke

Since graduating from Boston University with a degree in painting and a minor in psychology, Stieber estimates that she has completed well more than 30 paintings, and has spent time as an artist in residence in several local galleries with lots of public interface, which she said is unique for an artist.

From her start at Balboa Park’s Spanish Village Art Center with regular public hours, to an artist-in-residency and a gallery show at a fishbowl studio in Alexander Salazar Fine Art Gallery on Seventh Avenue and Broadway, to an artist-in-residency at ArtLab in Normal Heights, to eight months at Cirello Gallery in North Park, she always has welcomed the public into her workspace.

"I started my art career painting in front of other people and communicating with the public, and that was really so helpful because it taught me to be open and talk with people and share my work with people and see what they responded to," she said. "It was a lot of bringing the public in, so I think that's a very unique thing that not many artists do."

Initially, Stieber began by selling mostly private commissions for people who liked what they saw in what she calls her electric realism-style paintings and requested specific people or objects.

She now does fewer commissions and instead aims to develop her own work, using elaborate photo shoots as reference when she takes the concept back to her studio. She separates her work into different bodies based on theme or subject matter, but said the overall style is still distinct and recognizable.

"Overall, the work really shares a huge common thread, so the term that I use to describe it is electric realism, because it's real life, it's people," Stieber said. "I'm painting recognizable forms, but I'm sort of pulling the energy out of them. The colors are more vibrant, and everything's a little bit more intense than you might see it in real life. I love juxtaposing synthetic color like these hot pinks and greens and blues on the human form throughout all of my work."

She first experimented with the concept of the synthetic versus the natural while studying in Venice, Italy, in a small studio that she converted into a "closed-off, dark, fire hazard of a box." Using colored lights, Stieber distorted her view of color in the box and then painted using what her eyes interpreted as the right color.

"If you're closed off and in a dark space and shining a red light, everything that you're looking at as the artist was distorted," she said. "So, for example, a tube of green paint looked red, and a tube of purple paint looked orange, or something like that. So I let my eyes adjust to the new color that was in this weird space and I painted a whole painting without really recognizing what the colors were like in natural light. And then, after maybe eight hours, I took the painting out and the colors changed drastically, and they were almost neon."

Stieber said she has been working with this color concept ever since, and used these same vibrant, often mismatched tones in her two hotel commissions.

The first, which sold for close to $13,000 for the Courtyard Marriot on Sixth Avenue and Broadway in the Gaslamp District, was an 8-by-7-foot “funky” water piece that was installed behind the front desk in March. She's putting finishing touches on the second commission, a 7½-by-5½-foot piece called "Fish Out of Water" for the SpringHill Suites by Marriott in Oceanside, which sold for $10,000.

Stieber will keep half of that total, while the Denver-based art consultant firm Nine dot Arts, which facilitated both commissions, will keep the other half. She was given two months to complete the second piece, and will have it finished by early December with an expected installation date shortly after.

When asked about her decision to return home to San Diego as opposed to the larger art scenes in New York or Los Angeles, Stieber said she doesn't regret it in the least, and has found that San Diego actually has some burgeoning art communities in rather unexpected places.

"When I first graduated, there was this pressure to move to one of those two cities. ‘That's the only place where the art scene is' — that's what everyone was saying. But I moved back here because I knew there was support here," Stieber said. "I feel like I couldn't have made a better decision at all, because I visit my friends in New York and Los Angeles and none of them are having success like this — I think that might be like a small fish in a big pond situation."

She said now is a great time to be an artist in San Diego, with several pockets of the city exploding with creativity, particularly Barrio Logan.

"Barrio Logan is completely blowing up right now — it's turning into the new Bushwick (Brooklyn) or something," she said. "It was so industrial and has all these huge factories, and I've been exploring around there a lot lately and there's all these crazy new art communities that are popping up. Like the old Wonder Bread warehouse was just taken over by Pulse Gallery, and then two friends of mine, glassblowers, just took over a warehouse and they gutted it and they're building it themselves to make it a glass studio. And there's at least four other warehouses that I could name that have maybe 30 artist studios crammed into them."

Aside from the support of the art community, Stieber said the she's part of a group of entrepreneurs who meet twice a month to talk through issues they're facing, share resources and work together, which has also been helpful.

For the most part, her Sarah Stieber Fine Art team is just herself and her mom, whom she calls her "momager," though she had an intern over the summer and is recruiting for another to help with marketing, gallery research, compiling artist packets and contracts, and assisting with photo shoots.

"What my goal into the future is, is to create very cohesive bodies of work and then showcase those at galleries, and then sell those through the galleries' spaces or through my own clients," she said.

She said she would ideally stay in San Diego and continue making frequent trips to Los Angeles for shows and meetings, though she said she's open to moving to New York or Los Angeles if that eventually makes more sense.

"Here, people have been so supportive and excited," she said. "I think the arts are really growing in San Diego right now. It's a great time to be here."