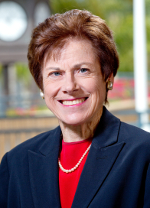 Reaser has been in her post at the FBEI for four years. In that time, she's produced economic reports and forecasts from the military’s impact in San Diego to the cost of alternative sources of water to bioinspiration. While she admits that she and her team have had their share of misses, her track record, which includes producing the most accurate economic forecast in the country for 2011 and 2012, is stellar.

Reaser said one of the keys to her success at the FBEI is the institution’s objectivity.

“We do try to be very objective -- the assessment of our scorecard each year helps us understand our biases and some of the errors that might take place in our various statistical and economic calculations,” Reaser said. “Economics is not an exact science -- I had often despaired of that fact, but actually even medicine or physics are not pure exact disciplines, but entail significant degrees of judgment. It is important not to bring one’s tendency to be optimistic or pessimistic or lean politically left or right into the forecast picture.”

She gave her 2013 economic forecast a B to B+ ranking, citing misses on sequestration, lower inflation than expected and a slightly lower GDP growth than predicted as reasons for the mark.

In her role at the FBEI Reaser doesn’t just connect the dots, as she calls it, between all these global, national and local factors, but takes an active teaching role as well.

“Teaching has been a new experience,” she said. “I learn probably as much from the students as they learn from me and perhaps probably even more. But it is certainly an experience where a teacher must truly know his or her subject to be able to instruct it.”

And by all accounts she does. Her first college course in economics at the University of California Los Angeles, where she would return for a master’s and Ph.D, was enough to convince her that business economics was the field for her, Reaser entered the banking world, where she remained until 2009.

Cathy Gallagher, executive director of the FBEI, said when staff at what was then called the Fermanian Business Center learned that Reaser was retiring from her post as chief economist for Bank of America’s Investment Strategies Group and was interested in starting a business institute at PLNU, they jumped on the opportunity.

“When she joined us four years ago, we’d never had an economic aspect to our work -- it was more business focused,” Gallagher said. “So she opened up the door to the economics behind our work. It’s pretty much led by her.”

And if Reaser has anything to say about it, it will stay that way for years to come, as she has no plans to retire anytime soon.

“I’ve told the university they’ll probably have to carry me out,” she said.