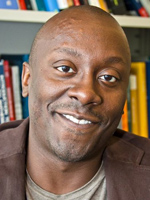 Blurring the distinction between "what’s biological and what’s not” might sound like science fiction, but Todd Coleman, associate professor of bioengineering at UCSD, principal investigator of its Neural Interaction Lab and co-director of the new Center for Perinatal Health, said this goal is real.

After successfully creating a shower-cap system hooked up to a computer that would allow someone to fly a remote-controlled airplane just by imagining a sequence of right and left turns, Coleman wasn’t satisfied with the necessary bulky head gear.

Though the electronic hardware component is typically firm and bulky, Coleman and his group were able to remove what he compares to the cutting board portion of these chips, and simply use the thin top layer that actually holds the necessary goods, to create a solution to the problem of only being able to use these new technologies in a lab or controlled setting with wires galore.

The result — a small, compressible and flexible patch — resembles a clear Band-Aid but does so much more.

Coleman outlined some of the existing and possible uses at a Connect presentation on the wearable technology’s health applications Wednesday at AMN Healthcare. At the forefront of those are pregnancy and neonatal monitoring.

The existing standard of prenatal monitoring involves bulky belts and wires that have to be hooked up to machines to detect and read out data. This means the technology is available only in hospital settings and requires expertise to use.

With the epidermal electronic patch, anyone with access to a smartphone, which Coleman noted outnumbers those with access to water in many developing countries, could monitor fetal heart rate and uterine contractions, among other metrics.

Using cloud storage and data analytics, Coleman and his lab team, some of whom were present at the presentation and received hearty thanks from their P.I., were able to get data that very closely aligned with the data from the standard technology that was used simultaneously, proving that the tattoos work. The lab’s work on this particular use of epidermal electronics won funding from the Bill & Melinda Gates Foundation in 2012.

The use of the wearable device would allow pregnant women to monitor themselves and their fetuses between hospital visits, making information available to more women, a central goal of Coleman’s work.

“We are interested in democratizing the use of this technology,” he said. “It’s one thing for us to be doing it ourselves, but in order to make an impact, this needs to be democratized.”

On the neonatal side, Coleman said a chance run-in with Dr. Mary Jo Harbert, director of UCSD’s School of Medicine neonatal neurology service, presented another opportunity for collaboration to meet an unmet need.

So what’s the issue? It turns out there’s a critical shortage of neonatal neurologists; also, existing brain-monitoring technology involves scrubbing the scalp and applying conductive gel, which is dangerous for fragile newborn skin, leaving the babies open to infection, abscess and even death.

“If we take a look at the number of neural critical care specialists for adults, it’s over 1,500 just in the U.S.,” Coleman said. “If we transition to babies, there are only 30 brain-injury specialists for newborn babies in the world.”

The epidermal electronic sensor has been studied on four or five babies, alongside conventional monitoring devices, with similarly successful results as in the prenatal studies. Coleman said some of this technology will be piloted at the Women and Children’s Birthing Center at Jacobs Medical Center, opening in 2016.

Additional uses for the tattoo include diabetic monitoring and stroke monitoring in adults.

While things are looking up for Coleman and his Neural Interaction Lab, he admits that it’s not all smooth sailing. He said that while there have been many successful cases in the studies, the epidermal electronic patch has not always matched up with the standard technologies’ results, and the positioning and orientation of the patch are still critical points to receiving any reading at all.

Coleman said privacy concerns are also top of mind for not only this concept, but the entire data and analytics-driven aspect of the health care industry. Still, he said, the goal is an admirable one.

“Our vision is to try to use these types of technologies to let people go back to being human, and let computers carry out the details.”

July 11, 2012 -- George Chamberlin speaks with David Hale, CEO of Hale BioPharmaVentures, and Duane Roth, CEO of Connect, about San Diego's biotech industry and innovations that come from this region.