New Bosa projects on the way

The Mark Co. reports that the units in all the major condominium developments built in downtown San Diego within the past decade have been sold out at least once.

A total of 1,929 condominium units have been approved with an additional 172 under review, according to the Mark Co. survey. The East Village has the largest number of proposed for-sale units with 981, followed by the Columbia District with 749.

If the past is a prologue, many of those 3,073 apartments could be converted to condominiums at some future date. Each of these projects will have condominium maps as a matter of course.

Vancouver-based Bosa Development, which led the transformation of downtown with thousands of units built in the 1990s and the early to mid-2000s, is gearing up to do it again with at least three new projects that will push the envelope once more.

Near its Bayside at the Embarcadero development, which saw its last new sale in September, Bosa is planning to develop 221 condominium units at its Parcel 9 (the old designation when Santa Fe's Catellus Corp. owned the property) at Pacific Highway and Broadway in the Columbia District.

Bemi Jauhal, Bosa sales and marketing director, said her firm hopes to break ground by the end of the year, with completion roughly two years later.

Bosa's 285-unit Kettner & Ash development -- at the address of the same name -- had alternately been considered for office space as well as condominium use, and it now appears the multifamily use will prevail.

Jauhal said the Kettner & Ash project, which will feature one- to three-bedroom floor plans and about 25,000 square feet of ground-floor retail in 36 stories, is not expected to get underway until sometime next year.

Construction is expected to take about two years to complete once the project gets going.

The First & Island development by Bosa in the Marina District calls for 172 units in 38 stories, but Jauhal said Bosa will get Parcel 9 and Kettner & Ash going before it moves onto First & Island.

While Bosa also owns property on Pacific Highway between First and G as well as an ownership interest in a property on Cortez Hill, these are much more long-term plays.

Another big apartment project is known as Leeding Edge at 16th and G streets in the East Village. This energy-conscious proposal by Avion Development is being planned for 530 units. Avion Development has headquarters offices in downtown San Diego.

As for the existing condominium developments, while the vast majority of the properties were in resale mode by the beginning of last year, a few units were sold in 2013. 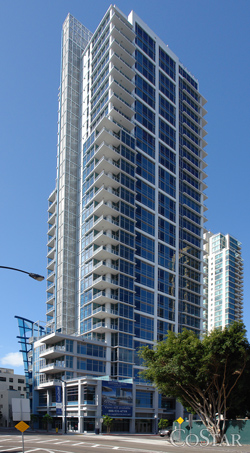 Sapphire Tower, a joint venture of Centurion Real Estate and Avion Development, saw its last two new sales completed in October, according to The Mark Co. The first closings were in November 2008. The units range from 904 to 2,981 square feet. The prices at the time of the Mark survey (including the resold units) ranged from $479,000 to $2.06 million.

Along with Bayside at the Embarcadero and Sapphire, other large condominium properties that have sold out in downtown San Diego include Aria, a 137-unit development by Anka Property Group at 1441 Fourth Ave.; Bosa's 248-unit Electra property at 700 West E St.; The Legend, a 178-unit Bosa Development property overlooking Petco Park; The Mark, a 244-unit development of The Douglas Wilson Cos. that was later acquired by The Radco Cos. at 800 The Mark Lane; and Lankford & Associates' 301-unit Smart Corner development at 1080 Park Ave.

Smart Corner was one of those projects hit hard by the recession, so it was decided to rent out units while waiting for the sales to pick up once more. Smart Corner, which literally has the trolley running through the middle of the property, sold out its last unit in 2013.

The development, whose office portion became the new home for the San Diego Housing Commission a few years ago, features one- and two-bedroom floor plans.