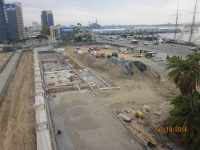 At the County Administration Center's 75th anniversary last year, Supervisor Greg Cox said the new park going around it would "set the whole building off in a much more attractive setting."

That was last July. A lot has happened on site since, as the $46.5 million park has begun to take shape ahead of its expected opening this May.

A new underground parking lot bounded by Ash Street to the south, which had previously been an at-grade parking lot taking up the entire block, has opened. On the north side, the space previously occupied by the CAC's other parking lot is now cleared, and the total of eight acres that used to be surface asphalt is nearing its renewal as recreational park land.

The transformation of that south parking lot into an underground garage proved to be one of the more challenging tasks for McCarthy Building Cos., the general contractor on the job.

According to Lee Sudhoff, McCarthy's project director, the original plan to set up a perimeter dewatering system to allow for the preconstruction excavation didn't go quite as expected. That system was supposed to help pump down groundwater, which can be expected so close to a shoreline, so that when the excavation reaches the bottom of its hole, the dig area is dry.

"That's the theory behind it," Sudhoff said. "That wasn't what we experienced. We got down to the bottom and it was still full of water." 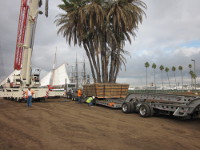 It turned out to be a layer of clay, unnoticed in soil reports, which likely decreased the amount of water being pumped out. The addition of a perimeter drainage system helped dry things out, and the 250-parking space below-grade garage -- allowing for an equal number of spaces previously available in the surface lot -- was completed last September.

Supervisor Ron Roberts acknowledged at its opening the expense of an underground structure, but said that on the waterfront, such an investment makes sense.

"What you gain, then, is incredibly valuable land for public use," Roberts said.

Planning for the garage, which was designed with the International Parking Design group, required some specialized structural components to protect against groundwater pressure near the shoreline and the load of the land above.

"The loading requirements on the roof deck are a lot more than normal," Sudhoff said. "That was to account for earthworks, like the weight of the soil and also to allow for -- on one side of the park -- for fire trucks to get on there if they ever needed to."

For security, a layer of foam was placed on the east side of the garage to help displace some weight from the soil, which is 3 to 4 feet thick on that end.

The civic fountain planned to be one of the new park's eye-catchers is under construction. Some equipment for pumping, filtration and chemical treatment, is planned to be set in place toward the close of construction. When complete, the fountain will span roughly 800 feet -- split into north and south sections -- and be about 40 feet wide.

Crossing over the fountain's pools will be a number of narrow pedestrian bridges, built from the terraced eastern edge of the pools to the concrete landing on the west. The bridges will be reinforced with a stainless-steel frame, and have a decking that rises less than 3 feet above the water at its highest point. Railings won't be added because the elevation of each bridge is within code for their absence.

Recent interactive enhancements on the southern end of the park plan have left a few things to figure out, but Sudhoff said the changes would make the family area there more "special." Changes include more features than previously planned, such as slides.

"At one point in time, it was more of a basic family play area," Sudhoff said. "It's become a lot more than that."

One of the last things to happen before the park opens will be the finalization of landscaping and the sod placement. Schmidt Design is serving as the landscape architect.

Since late 2012, a lot has been moved around to incorporate many of the existing trees on site in the new plan. In October 2012, construction crews began digging up and moving large groups of palm trees to be preserved and replanted.

The county reported that the first to move were two historic Senegal Date Palm trees dating back to the plans of landscape architect Roland Hoyt in 1939. They weighed 45,000 pounds and 95,000 pounds each, requiring a 300-ton crane to move them. When the park opens, they'll be seen in their new location farther north in what the county is labeling the "historic core" area on the County Administration Center's west lawn.

Shade trees are planned to create a perimeter around a feature gardens area in the west end of the northern park space, and along the fountain to the southern park.