Women's roles in workplace are moving up 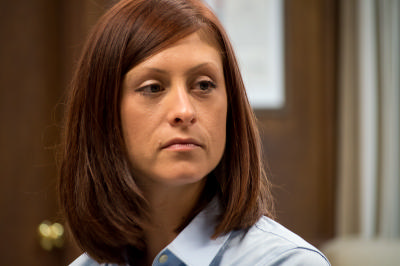 The roles of women in the workplace are changing from supporting positions to those in upper-level management, according to a panel of female executives who spoke with The Daily Transcript recently.

But although progress has been made, there is still a disparity between men and women in leadership positions in most industries.

Alisha Sirois, a branch manager and senior loan officer at Guild Mortgage, said she has seen positive changes in the real estate industry, with women taking on more decision-making roles. But she said women have to be more assertive for that progress to continue.

"There has to be a demonstration of strength to gain their respect," she said. "And that's probably the same for a woman or a man. That's the world.

Guild Mortgage, a nationwide, multibillion-dollar company, is an example of how far women have come in the real estate industry. The company's CEO and chief financial officer are women.

In the legal profession, being aggressive is almost a necessary trait, especially for trial attorneys.

But it can be a difficult approach for female litigators, according to Micaela Banach, a partner with the San Diego law firm Kirby Noonan Lance & Hoge.

"Being aggressive is a big issue for women in litigation," she said. "You have to have thick skin. You have to be able to throw punches, and a lot of women find that to be a challenge. It's just the nature of our personalities."

While women are graduating from law school at about the same rate as their male counterparts, there's still a gender disparity at the top of the legal ladder. There are significantly more partners who are men, and men occupy a large percentage of the top executive positions at law firms.

Being aggressive sometimes can be seen as a negative character trait in women, but the panelists agreed that women should not be held back by such perceptions.

"I've found that not being easily offended plays a big role, especially for me working in a predominately male industry," said Jessica Kalloch, a business development executive with Bill Howe Plumbing.

Pauline Martinson is the executive director of I Love a Clean San Diego. She has been told she runs the nonprofit like a business, which enables her to get results and allows her to get respect.

"(It) really comes down to, 'Are you going to be bringing in more revenue than goes out?' and 'How are you keeping your staff?'" she said. "Retention is really important for me and our organization."

While being comfortable taking an aggressive approach can be successful, it's not the only way, Kirby Noonan's Banach said. There are many types of female executives who have proven to be effective leaders.

"You don't have to be most aggressive woman in the room to be successful, either," she said. "There are a lot of successful women that are not very aggressive. They are just confident and smart, and they work hard."

Lee Anne Davis, CEO of the logo apparel and merchandise company PromoVentures, said fear is not the same thing as respect, an important distinction for women to know.

She previously worked for Columbia Sportswear and its chairwoman, Gert Boyle, a tough-minded businesswoman and matriarch of the business. It was there that Davis learned some important lessons, she said.

"We're not good at beating our own drum," she said. "That's not a comfortable space for a lot of women. That's one where you may have your equal male partner, and he's very good at that. We think if we put our head down and we work hard, we're going to get noticed.

"I definitely see that's a change that's happening even within the last five years. They're getting a little more comfortable with risk."

Lisa Freedman, executive director of SD Sport Innovators, said women can be more empathetic, which is a great trait to have for those in leadership positions.

"If you create more of a team environment, you get more out of people that are there," she said.

Pro Back Office, which provides management services for small business and professional organizations, has a staff of 30, more than half of whom are women who don’t work 40-hour weeks. Many of them just want to work 20 to 30 hours a week, and the company is able to oblige, which has led to a happy workforce, said company President Jennifer Barnes.

"Literally, no one has ever quit in the last two years," she said. "So giving people what they're asking for and giving them a bit of a work-life balance is helpful."

Companies that do not provide options may find themselves losing access to a talented segment of the workforce, who are heading to other businesses or striking out on their own.

Davis, the CEO of PromoVentures, said she has seen a rise of female entrepreneurs -- or what she likes to call "fempreneurs."

"I think a lot of women are finding if they're not so fortunate to work in a flexible organization, sometimes they find a dissatisfaction of working for someone else, so they start their own business," she said.

Guild Mortgage's Sirois said how high a woman rises in her industry ultimately comes down to a personal choice for them and their families. The rise to top leadership levels requires a certain amount of hours and sacrifice.

Married women with children can achieve the highest levels of management, but it may require that their spouses stay at home and have a strong support network.

"You have to be willing to recognize what your highest and best use is," Sirois said.

Heather Pollock is the executive director of Girls Think Tank, an advocacy group for homeless men and women. The majority of its board is women, giving Pollock firsthand knowledge of a group of women who have been able to successfully balance the rigors of work and home.

"I think it's nice for me because I can kind of see how they've carved their path as well," Pollock said, "so I look up to them."

Women can still tend to be underestimated, no matter what level of success they've achieved.

Elizabeth Maland, city clerk of San Diego, relishes the role of being underestimated -- whether it be because she's a woman or because of her age.

"My thing has always been, I'm just going to do the best job I can at whatever I do -- whether I'm the janitor or the clerical assistant or the crime analyst," she said. "And in my experience, that tends to provide opportunities regardless of what people thought of me to begin with.

"I'm OK with people underestimating me because they tend to regret it."