Working with Neil Young on music’s next big thing

Neil Young, the legendary musician, called me out of the blue in January 2012. He'd gotten my name from a mutual friend who had given him a copy of my book, "From Concept to Consumer." I'd been a long-time fan and attended many of his concerts over the years, so it was exciting to talk with him. It also turned out to be one of the most important calls of my life.

Neil explained to me about his quest to bring the same high-quality music that he hears in his studio to the public. He explained how the movement to MP3s that reduces the data in the recording by 95 percent, was a huge loss to both the audience and the music industry. He was firmly convinced that those of us who love music would appreciate listening to high quality, uncompressed music, rather than what was being offered by the big electronic companies. He would later tell me that this effort was one of the most important things he has ever done in his career.

Neil invited me to meet him at his ranch in Northern California and asked if I could help him develop a music player that he would call the PonoPlayer (“Pono” means righteous in Hawaiian.)

It was an idea that existed in his mind and a few sketches, but clearly something he had thought about for years. It would be part of his PonoMusic system that would deliver the best possible sound.

Of course, I said yes and assembled a small development team, including a few very smart engineers with whom I had worked before. We then went to work over a span of two years, meeting regularly with Neil. 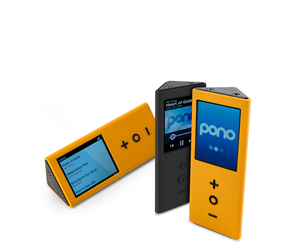 Now, two years later, after several starts and stops, overcoming a number of technical challenges and being turned down by venture investors, Neil was ready to tell the world about PonoMusic.

He chose to introduce the product at South by Southwest (SXSW) in Austin, Texas, an annual music, film and interactive conference. Neil was the keynote speaker and drew 2,500 people to hear him talk about the importance of his mission: to save a dying art and bring back high-quality music (Listen here http://alturl.com/8hhy4).

Simultaneously, the company, now with a CEO and software head, introduced the product on Kickstarter to raise some funds, but more importantly to see whether people cared about this cause. If we listened to the supposed experts, we could have easily been discouraged. Many claimed MP3 was good enough, that no one can discern audio quality beyond a CD, and many said people just don’t care.

Kickstarter was the ultimate test. Would people be willing to commit to pay for a product on the spot sight unseen? Kickstarter rules don’t even guarantee that the contributor will get the product. We offered our players and special signature editions from many famous artists along with less expensive items, all with the goal of raising $800,000 in 34 days.

While I was hopeful, I was also anxious. Never could I have predicted what would happen in the first few hours of the campaign.

We went live on Kickstarter at 1 p.m. March 11 that preceded by a few hours the talk Neil gave to the packed ballroom. We figured the talk would bring awareness to the Kickstarter campaign and that’s when we’d see contributions begin. But before Neil spoke his first word, $300,000 was donated and the number passed $500,000 during the talk.

That was an auspicious beginning. PonoMusic raised its goal of $800,000 in the first day and by Monday was approaching $4 million. By Friday morning, PonoMusic became officially the most-funded project in Kickstarter’s technology category and the 11th-most-funded in the world.

I’ve worked on many products over the years, many of them iconic (Polaroid SX-70 and Apple Newton), but never have I worked on something so important, particularly to the world of music. It’s been an honor to play a part to help Neil fulfill his goals. While there is still an immense amount of work to be done, we have the wind on our back from those who believe in what we are doing.

Pono will go on sale in the fall, once we finish the engineering and prepare it for mass production, and once the PonoMusic store is completed. (ponomusic.com)


Baker is the author of "From Concept to Consumer," published by Financial Times Press. Send comments to phil.baker@sddt.com. Comments may be published online or as Letters to the Editor.
User Response
0 UserComments