Never say no at The Bridges at Rancho Santa Fe

By GLENN GRANT, Special to The Daily Transcript
Wednesday, April 9, 2014

"Most of our clientele base makes appointments to be sure they have unobstructed, uninterrupted time with us. So we may work seven days a week, nine to 14 hours a day -- whatever's required."

Personalized attention is one of the reasons the gated community of 240 upscale homes has done well in the recent economic climate.

As of late February, four homes had resold for 2014, ranging in price from $1.8 million to $6.25 million. About 80 percent went to cash buyers, according to Jackson.

"They're dealing with their private mortgage banking services and leveraging their assets," he said. "They could pay cash; they just want their money to work for them a little bit more. They are all concerned about interest rates," he said. 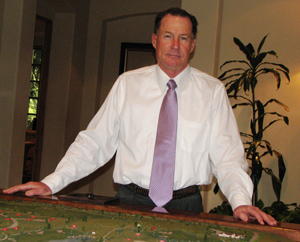 Bob Jackson is dedicated to serving owners of the 240 upscale homes in The Bridges at Rancho Santa Fe gated community. Photo by Glenn Grant

"They have to decide: 'Is it better for me with the interest rates down to put a mortgage on this now, or am I better off to leverage on negotiating on the price and come in with all cash?'"

More of these affluent buyers are purchasing their primary homes in Rancho Santa Fe, Jackson said.

"I think the days of people having the luxury of having five to six different residences around the world are gone," he added. "They're now turning that down to either one or two. They're from San Diego, across the U.S., Canada and different parts of the world."

With houses ranging from 3,000 to more than 14,000 square feet, Jackson and his small staff only hold open houses on Tuesdays -- the one day of rest during the Del Mar Thoroughbred racing season. All other home visits -- like office visits -- are by appointment only.

"With this buyer profile, 98 percent have already done their research on our website before they even engage a real estate agent or go to see a home or a community," Jackson said.

"They will ask you many different questions and they already have the answer. They just want to see how you answer," he said.

"We're dealing with some of the most creative, intellectual and financial wealth anywhere in the world. And I'm very, very humbled to meet with these people firsthand and to be able to have them entrust us to represent them."