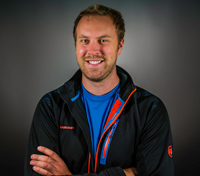 Who doesn’t have that classic story of hitting it big in online poker during college, taking a break from school, moving to Cabo San Lucas and starting a scuba diving business, then returning to finish school, form a consulting company, then organize a music and technology festival, became an initial member in the Qualcomm Labs group and leave that to start a home services app company, all before age 30?

This road less traveled -- more like rarely, if ever, traveled -- has certainly had some curves for Roland Ligtenberg, co-founder of HouseCall, but a singular quest has led him to all these opportunities, and what he predicts will be more in the future: finding and solving problems.

“I’ll just see a problem and want to solve it, and once it’s solved and it’s going really well, I always see new problems and I always really want to solve them,” Ligtenberg said.

“That’s what happened with the scuba diving -- I was like, man, this could be done way better -- or the music conference, I thought why isn’t there a music conference that also deals with technology? OK, I’ll build that. So at some point, I’ll do that again, but HouseCall’s a lot of fun right now, and it’ll be a lot of fun for several more years.”

HouseCall, formed by five former Qualcomm employees, four of whom, including Ligtenberg, came out of Qualcomm Labs’ initial group, aims to solve the problem of homeowners finding reputable, trusted professionals for services such as cleaning, plumbing and electric work.

The app is free for homeowners and professionals, with HouseCall earning a transaction fee from the total cost of the service. It is available only in San Diego, but Ligtenberg said they plan to expand up the West Coast by the end of the year.

With an undergraduate degree in economics from the University of California, San Diego, Ligtenberg has worked mainly in product and business development roles in the past, though he said he appreciates the startup environment, where he’s able to do a little bit of everything.

“There’s a lot more freedom at a startup, and that’s a really obvious answer, but you can kind of define the roles that you want to be and really fluidly go from one thing to the next. … It’s just a much bigger breadth of things that you get to be in control of,” he said.

Ligtenberg has been around entrepreneurship for much of his life; his father formed two companies and took them both all the way to IPOs during his childhood.

He acknowledges that his path is unusual and might not work for everyone, but said it’s important for young people to take the time to learn what they love, and not get too stuck in a traditional mold.

“I think it’s always worth it to get a degree, but don’t focus all of your time on school,” he said. “Focus your time on things you love and that are interesting to you, and put a lot of effort toward those because at the end of the day, all the people I look to hire are people that have done something interesting in their life. I almost never look at what school you went to or your GPA or test scores. Have you done something interesting and can you show it to me or do you talk about it with passion? That, to me, is far more important.”