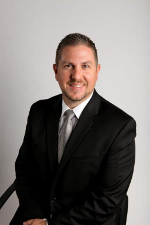 Being raised by “hippie-ish” parents on a small farm in the East County community of Descanso might seem an unlikely background for the founder and CEO of an information technology firm, but not for Dylan Natter of centrexIT, which provides a full range of IT services as an external department for its clients.

“I was actually born in the house that my parents still live in today,” Natter, 35, said. “We lived on a couple of acres up there, lived on a little mini-farm with goats and our own garden, and stuff like that.”

Natter's childhood curiosity -- “I liked to disassemble things and kind of reverse and see how they would work by taking them apart or breaking them,” he said -- ultimately led to his first job, at 20, as a troubleshooter for a subcontractor of Cox Communications.

“They put me on all of the special-case troubleshoots that no one else was able to work out, and I would go and work through those. I think that's where I really realized that I kind had a knack for that,” Natter said. “I was able to carry that (problem-solving ability) into the IT world.”

Natter quickly moved up in the ranks and was promoted to project manager for the subcontracting company's Arizona operations, but he didn't like living there.

He returned to San Diego and took a job as a waiter to pay the bills. On the side, Natter had an opportunity to do some IT-related work for a multiple-location chiropractic office.

“I was dealing with one of the local computer shops and one of the guys working in that shop would help me work through some different issues,” he said.

That guy was Eric Rockwell, now Natter's business partner and the president and CIO of centrexIT.

“(Eric) came over and took the technical lead in the company, and I'm more focused on operations and kind of the behind-the-scenes things, sales and ops,” Natter said.

Natter said his biggest challenge is to create an internal culture that fosters unparalleled levels of customer care and service.

“It's my job to make sure that (team members) are fully aware and present to the experience that they are creating,” Natter said. “They're not really working with technology, they're working with people who happen to be using technology.”

The only way to demonstrate the level of care he expects his team to show clients, he said, is to “take extreme care” of his team.

Thus, one perk enjoyed by centrexIT employees is a fully stocked, on premises Subway-style deli.

The company has received many accolades as one of San Diego's best places to work. It's all part of what Natter said is getting his team to understand the “people” aspect first.

Since joining the Better Business Bureau in 2004, centrexIT has a flawless A+ rating and zero-complaint record.

“We're handling a lot of trusted information for (clients), so there has to be a very tight bond of trust,” he said. “We're trying to shift the way people are experiencing technology. We have a big challenge ahead of us to do that, but we're up for it.”