By DEAN CALBREATH, The Daily Transcript
Friday, May 2, 2014

Just six weeks have passed since longtime opera fans Carol Lazier and James Merritt were married on the stage of the San Diego Opera, outfitted in a Victorian gown and white tie and tails, with the set of Giuseppi Verdi's "A Masked Ball" as a backdrop.

Just a day or two later, they were called to a surprise special meeting of the opera's board of directors where, under the advice of CEO Ian Campbell and then-board president Karen Cohn, they joined 31 other directors in a vote to close down the organization – a decision they almost immediately regretted.

Ever since, Lazier has been one of the strongest advocates of keeping the 49-year-old institution alive, committing $1 million of her own money to develop new business strategies.

And now as president -- after Cohn's angry resignation during a stormy board meeting on April 17 -- she has rapidly shifted the organization in a new direction.

During her first two weeks on the job, she put Campbell and his high-paid ex-wife on indefinite lead; called an unprecedented special meeting with the opera's rank-and-file membership; consulted with leaders of other operas as far away as Dallas, Minneapolis and Philadelphia; and launched a fund-raising drive that has so far collected $560,000, mostly in small donations from individuals who had previously been ignored by fundraising efforts targeting multimillion-dollar donors.

"It's been most pleasing to me that 85 percent of the gifts are under $1,000," Lazier said. "If we could get to $1 million with that kind of gift, it would really prove that there's a strong market in San Diego for opera."

More than 40 percent of the donations come from people who have never given to the opera before.

Lazier is under a tight deadline. Unless the donations hit $1 million by the next board meeting on May 19, there is still a strong possibility that the board might decide that the opera isn't viable, which would mean the contributions would be returned to the donors and the board would explore new options. 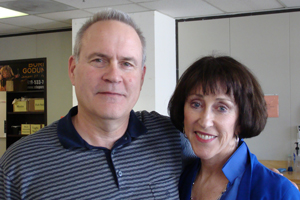 Carol Lazier and James Merritt were married on the stage of the San Diego Opera, outfitted in a Victorian gown and white tie and tails, with the set of Giuseppi Verdi's "A Masked Ball" as a backdrop. Lazier was recently named the Opera's president. Staff photo Paula Pisani

Although the opera occupies a rarefied space in American culture, the San Diego Opera has been dealing with problems that have plagued many companies, whether in or out of the arts: a charismatic CEO who held easy sway over the board of directors; a lack of transparency that kept key information hidden from the board's view; runaway overhead costs, including lavish office space as well as generous pay packages to the CEO; and perhaps most importantly a stultified leadership -- led by a CEO who has been in office for 30 years -- that has had a hard time coping with new trends in the marketplace.

But Lazier seems more confident that she will be able to turn things around.

"This is still a work in progress," she said. "We're combing the staff, our members, outside consultants and other people for ideas about how we are going to come out of this in the 2015 and 2016 seasons, and beyond. But I really think people are now all on the same page on this and motivated to succeed."

Lazier and Merritt have both been motivated to support opera for nearly as long as they can remember.

Lazier's love affair began when she was a child growing up in the San Francisco Bay Area, as she joined her mother on Saturday afternoons to listen to "The Texaco Metropolitan Opera Hour," a radio show that the oil company sponsored from 1940 through 2004.

After moving to San Diego, Lazier and her then-husband, venture capitalist Bill Stensrud, became involved in a number of charities, ranging from the Palomar YMCA to Solutions, a Poway-based nonprofit that Lazier founded to help high school students make the transition to college.

But they both also gave heavily to the opera, leading to seats on the board of directors and a stint in the president's seat for Stensrud, although he quit the board recently because he felt it was going in the wrong direction.

He recently told Voice of San Diego that he felt the opera should mix its traditionally staged grand operas that with newer material staged in different venues, such as New York's Loft Opera, which performs in lofts among other sites.

"Their performances are exciting, low-cost and I have been the oldest person in the place every time I have gone," Stensrud said. "This is a sustainable model.”

Like Stensrud, Merritt is also a longtime opera fan who likes the idea of shaking things up, whether through introducing new material or reaching out to audiences beyond the wealthy elite.

The Ohio native got his love for the opera from his father, who had a large collection of opera recordings featuring Maria Callas and other stars.

Merritt still listens to those old vinyl phonograph albums. And one of his favorite memories is when his father – while working in Europe for Proctor & Gamble (NYSE: PG) – took the family to a performance of "Aida," complete with live elephants, staged in the ancient Baths of Caracalla in Rome.

As an oncologist in Del Mar, Merritt has held high-ranking positions in a number of local biotech companies, including his current job as president and CEO of Imagine Pharmaceuticals, developing treatments for brain tumors, as well as former executive posts at companies like IDEC Pharmaceuticals and Viagene Inc., which have since merged with other firms.

Merritt's interest in opera led him to join the board three years ago, which is where he met Lazier.

When they got married on March 15, the wedding party all came in opera costumes -- including the minister, who wore a monk's outfit -- and Lazier's two adult sons, who came as Wagnerian Vikings.

Before they got a chance to take their honeymoon, Lazier and Merritt were called to a special meeting of the board of directors on March 19.

They were given no notice that it would involve a vote to dissolve the company, despite requirements under state law and the opera's bylaws that such moves require full warning to the board and general membership, as well as including the members in the vote.

Over the past several years, the board that had been warned the opera might run out of money by January 2015. And at a retreat last summer, consultants from the nonprofit group Opera America warned that the board that their overhead costs were too high and their donor base was shrinking.

But the management never seemed to show any urgency in addressing the problems and did not take steps to address the underlying issues, such as renegotiating contracts or reaching out to new donors – so Lazier and Merritt say it did not seem like an emergency situation.

"We'd had a balanced budget for nearly 30 years, so we assumed that steps were being taken so we would keep operating," Lazier said.

"We were lulled into a sense of complacency," Merritt said.
But on March 19, Campbell and Cohn laid out the financial problems in grim detail, telling the board that there was no alternative to closure.

And the board members, who had not come prepared for the topic, voted 33 to 1 to start closing operations starting April 13 – which has since been postponed until May 19 – and dissolve by June 30.

By the time Lazier and Merritt got home, they already had doubts about their action.

"We started asking ourselves: 'Where was the due diligence in looking for other ways to keep the opera running?'" Merritt said. "We quickly came to the conclusion that it didn't appear to have been done."

Merritt said that when he told the opera leadership that they should slow down, "we got the sense that they had an agenda. Instead of entertaining any debate, they kept moving forward on closing it down."

Together with other directors, they wrote a list of demands to Campbell and Cohn, asking for more data about the opera's finances as well as internal reports about personnel.

Even though the opera bylaws guarantee that all directors can see all of the organization's documents, they never got full compliance with their request.

But under pressure, Cohn did set up a committee to explore new alternatives to the opera, appointing herself as well as a number of her critics, including Lazier and Merritt.

When the critics challenged the way that she had been running the board, she angrily stormed out of the meeting with a number of her supporters, resulting in Lazier's appointment to acting president.

"I was really the last person standing," Lazier said. "I was the secretary of the board and by they picked me, all the other officers had left."

Working closely with Opera America consultants, Lazier thinks the opera should be able to present a lineup next year similar to what had previously been planned, although perhaps spending less money on sets and other items.

In the meantime, she has worked to cut costs -- such as moving the opera's headquarters out of its lavish 18th-floor suite on the Civic Plaza to cheaper digs around the corner.

For the future, Lazier is contemplating adding more variety to the operas in the mix -- including working to restore a contract for a mariachi-band opera that had fallen between the cracks during the infighting over the past month -- and finding new venues for performances outside the Civic Plaza Theater.

With all that work, Lazier and Merritt still haven't had time for their honeymoon, but they're planning it for summer, once more of the dust clears.

Opera starts releasing financial data at request of board

Must the opera become a phantom?