San Diego-based ecoATM wants to pay you for your old phone or tablet. A retired iPhone, Nokia or Samsung smartphone could be worth a couple of hundred dollars. And if you’re near any of its 900 ecoATM kiosks, you can get your money on the spot.

New technologies are driving hardware innovation at such a rapid clip that we’re now discarding these products at record rates, not when they wear out, but when we want to upgrade. It could be to get a tablet that’s lighter and thinner or a phone with a larger display. We’ve been trained to believe that the latest is always better and to want to be the first with the newest.

While this may be good for the economy, it’s not good for the environment, if we just throw out the old. But what may be one person’s old gadget is another’s sought-after device. And companies have sprung up to find ways to pay money for old products and sell them to others.

According to Bamboo Mobile, an electronics recycling company, there were about 370 million idle, non-active devices in the U.S. market at the end of last year. This number is expected to rise to 461 million by 2018.

EPA figures show that of the 370 million, fewer than 20 percent were recycled, but that number is expected to nearly double by the end of 2018 because of new and convenient ways to quickly turn your old product into cash.

When I bought my most recent phone, an iPhone5S, I sold my iPhone5 to Gazelle, an on-line service that will buy your old phone, tablet or music player. The process is pretty seamless. Look up your phone on its site, describe its condition, and you’ll be instantly provided with an estimate. 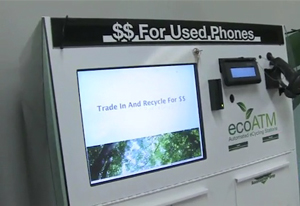 San Diego company ecoATM has found a way for people to conveniently recycle their old electronics, rather than have them end up in a landfill. Courtesy photo

If you accept the estimate, register and the company will send you a mailer for your phone. After receiving and inspecting your phone, they will mail you a check. If they find the condition to be different than you described, they’ll revise their offer.

My iPhone5, a 32GB Verizon model in very good condition, fetched $350. That offset about half the cost of my new phone. My experience with Gazelle, however, was not as rapid as described. I received emails alerting me that the phone was received and was being checked, but then heard nothing for about three weeks. I received the check a month later.

Five years ago, ecoATM’s founder, Mark Bowles, was looking for a way for people to conveniently recycle their old electronics, rather than have them end up in a landfill. I visited the company when it was first founded and it seemed to be a very ambitious undertaking. Because it paid out money, the company needed not only to identify the device, but also had to carefully figure out its condition. A phone with a chip or scratch on the display would be worth much less than one without flaws.

I recently revisited the company, and it’s come a long way. It’s gone through three generations of machines and has placed 900 of them in malls and Wal-Mart stores across the country. EcoATM is now a subsidiary of Outerwall Inc., the company that also owns Redbox and Coinstar kiosks for movie rentals and coin counting.

The ecoATM machine has also grown in sophistication. I got a behind-the-scenes look at the latest model in operation at company headquarters in Sorrento Valley. The tall, attractive kiosk with its large LCD display invites you to trade in your old device for an immediate cash payment.

The customer is invited to get a free estimate of the device in a few minutes, once the machine performs a thorough evaluation of the product. I tried it with my iPhone 5S.

A large lid rises in the front where you place your phone onto a glass platen and plug in a cable that appears. There’s actually a carousel of cables that fit essentially every type of phone, tablet and player. Once you select the type of product, the appropriate cable rotates into place.

The kiosk then thoroughly evaluates the phone — identifying the memory, provider and both the phone’ internal and external condition. Cameras take pictures of all sides of the phone. Using a wireless connection, the ATM checks the phone’s serial numbers against a list of stolen products and looks up the current value of the phone using a continuously updated database.

Once the evaluation is complete, a price flashes up on the display. If you accept it, the machine will wipe off all of your data from the phone, and the cash will be dispensed, just as at a bank ATM. Or you can reject the offer and take back the phone.

What happens to the devices that ecoATM collects? They’re sold to a network of wholesalers that resells the phones. While the company was mum on providing more information, there is apparently a thriving business in buying and refurbishing used products.

EcoATM indicated that all who buy their used devices are vetted to insure the phones are not improperly recycled. About 75 percent of the phones find a second life; the rest are recycled by certified e-waste reclamation facilities.

So check your drawers and closets for old phones and tablets, and you might find you can convert them to quick cash while responsibly recycling them. (ecoatm.com).