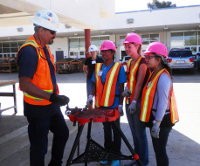 With women making up only 9 percent of the construction workforce today, according to the Bureau of Labor Statistics, Camp NAWIC is an effort to expose young women to their potential for a career in construction at an early age and encourage them to study the literacy and math skills needed to pursue construction training.

At Camp NAWIC, high school students took on a wide variety of journeyman and apprentice projects. ABC San Diego conducted an all-day plumbing project for 12 girls interested in construction careers. Instructors and volunteers gave the young women hands-on experience in basic plumbing, including the installation of faucets, replacing the fill valve for a toilet and cutting cast-iron pipes. The campers completed a pipe picture frame with assorted pipes, and used recycled PVC pipes to construct a planter box. Every project included lessons in proper safety procedures. 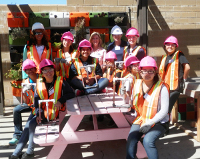 Participants pose with their plumbing frame projects at Camp NAWIC.

NAWIC originally began as Women in Construction of Fort Worth, Texas. Sixteen women working in the construction industry founded it in 1953. The group was so successful, it gained its national charter in 1955 and became the National Association of Women in Construction. Today, NAWIC provides its members with opportunities for professional development, education, networking, leadership training, public service and more.

Thanks to El Cajon Plumbing & Heating Supply, Viega, Pacific Rim Mechanical and Brian Cox Mechanical for providing the supplies, and thanks to all of the volunteers who made this day successful.