Travelers can soon park car in US, fly out of Mexico

The Cross Border Xpress and pedestrian bridge to Tijuana International Airport will be open to travelers next summer. Courtesy image

After six years of planning, designing and permitting on both sides of the U.S.-Mexico border, construction has officially commenced on an unprecedented port of entry that will link San Diego with the Tijuana International Airport.

The Cross Border Xpress will be a 350-foot-long pedestrian bridge that starts in Otay Mesa, and goes directly over the U.S.-Mexico border and leads into Tijuana’s airport.

On the U.S. side, there will be an approximately 65,000-square-foot facility with indoor and outdoor waiting areas for passengers and guests. There will also be space for retail, food and beverage shops, a bilingual customer service and concierge, and a parking area.

On the Mexico side, construction has already started to accommodate the landing of the bridge that will include renovated passenger facilities and amenities at the Tijuana airport.

The project is expected to open for passenger crossings in summer 2015.

U.S. Customs and Border Protection, which participated in the design of the Otay Mesa facility, will staff operations at the Cross Border Xpress building through an agreement with the project’s ownership.

“This partnership is an innovative way to optimize resources and help mitigate peak wait times,” said Pete Flores, director of the CBP San Diego field office. “Together with our private sector partners, we can better facilitate travel to continue to grow our economies on both sides of the border.”

The $120 million project is being developed and operated by Otay Tijuana Venture LLC, a private investment group with U.S. and Mexican shareholders. Investors include PAP Corp., Palareo Inc. and EGI-Otay Investors.

The Cross Border Xpress is being financed by Bancomext and Invex, with construction underway by Turner Construction and Hazard Construction in San Diego, and Grumesa S.A. de C. V. in Tijuana.

Renowned architects Legoretta + Legoretta designed the project in conjunction with Stantec, which has extensive experience in designing airport facilities throughout the world.

“This is a great example of private investment creating much-needed public infrastructure to facilitate safe, secure travel and trade,” said Mark Cafferty, CEO of the San Diego Regional Economic Development Corporation. “A multimillion dollar bi-national private investment in our region will create capacity for more than 2 million border crossings per year that will translate to job creation, industrial development and competitiveness for the San Diego/Tijuana Region.”

The cross-border terminal is intended for those who travel and do business in Mexico and San Diego.

The Tijuana International Airport offers flights to more than 30 cities in Mexico and also has direct flights to Shanghai and Tokyo.

The idea to connect San Diego and the Tijuana International Airport via a pedestrian bridge started in 2008, when a private bi-national group of private real estate investors from the United States and Mexico formed Otay Tijuana Venture LLC. 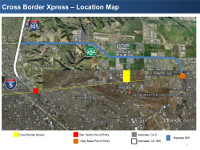 A map shows the location of the covered pedestrian bridge going over the U.S.-Mexico border and into Tijuana International Airport.

That year, the company acquired 55 acres of undeveloped property in Otay Mesa, directly north of the Tijuana International Airport. The property previously had been designated for an industrial park.

After purchasing the property, Otay Tijuana Venture LLC pursued approvals and entitlements for this rare and complex project from U.S. and Mexican government agencies at the local, state and federal level.

Hurdles included local land-use entitlement and building permits from the city of San Diego; an environmental review of the project; operational planning; and coordination with the Tijuana airport’s improvements.

“The Cross Border Xpress has captured the interest of the business community in the San Diego-Tijuana region for many years,” said Jerry Sanders, president and CEO of the San Diego Regional Chamber of Commerce, in a written statement. “Millions of dollars and thousands of jobs are being lost each year due to border crossing delays and wait times, and that loss has a real and tangible impact on the economy of our region, as well as our quality of life. This is a significant catalyst for business between the U.S. and Mexico.”

Stephanie Saathoff, spokeswoman for the project, said future expansion of the Cross Border Xpress could include hotels, gas stations, convenience stores, restaurants and an industrial building.