She's also known to bring her own hurdles to a meet if the track where she's competing doesn't have the proper ones.

Oh, and she was once named the best female masters athlete in the world by track and field's governing body.

"My primary reason for doing this is not self-satisfaction, but it's longevity," Hanscom said, seated in a conference room of her Mission Valley office during a rare, still moment. "I want to live a long, healthy, active life."

Instead of signing up for AARP, she's laying down PRs (personal records). She said she's saving the typical hobbies for seniors — ceramics, painting and playing bridge — for her "golden years."

"I like to do those things, but I'm not ready to be that inactive."

You could say these are her golden years.

Since 2001, Hanscom has captured 10 world titles and won 68 national championships in events ranging from the pole vault to the 80-meter hurdles.

Next month, at the Nevada Senior Games in Las Vegas, she will try to break a world record in the 300-meter hurdles.

"You meet like-minded people that have similar interests in being active and bettering themselves in an event," she said, explaining her interest in the sport. "It's hard to find people in older age groups that really try to push themselves, so it's a nice community of people who are really trying to push themselves."

A former marathon runner, Hanscom turned to masters track and field at 46 to save the wear and tear on her body from distance running, while still satisfying her competitive nature. She got the idea after seeing an article about the Senior Olympics. 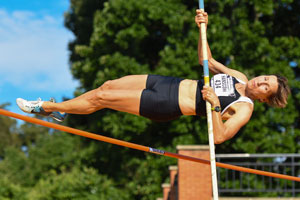 Since 2001, Hanscom has captured 10 world titles and won 68 national championships in events ranging from the pole vault (above), to the high jump (below) to the 80-meter hurdles. Photos by Rob Jerome

She began researching what events were offered and what times/distances she needed to be competitive. Most of the results were intimidating.

"The one thing that the women were doing poorly at was pole vault," she said. "I thought, '6 feet? That's all? I think I can win a gold medal at the Senior Olympics in pole vault.'"

Hanscom, who used to pole vault with a bamboo pole in her backyard while growing up in Tempe, Ariz., needed to get the proper equipment.

During her research, she met an older couple from Del Mar who regularly competed in — and won — masters track events. They encouraged her to go to meets and expand her repertoire beyond the pole vault. Soon Hanscom was hooked.

Her crowning achievement, so far, is the word record in the women's 55-59-year-old heptathlon at the World Masters Athletic Championships in Lahti, Finland, in 2009. The record-setting run was one of five gold medals she captured at the outdoor world championships. 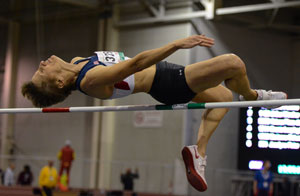 Later that year, she was selected as the best in the world by the IAAF and was feted at a special ceremony in Monaco, where she met Olympians such as record-setting sprinter Usain Bolt.

"I didn't set out to break a world record; it just transpired that way," Hanscom said. "Because it was the heptathlon — seven events over two days — you just don’t know what the conditions are going to be. It worked out well. I was just on top of every event."

Unlike her track career, Hanscom’s interest in law was set at an early age — in third grade.

"The 'Be a Stewardess' book had been checked out already, and the only one left was, 'Be a Lawyer,'" she joked.

"It's a good career," she said. "I enjoy the intellectual challenges, the different subjects that you encounter and get to learn every day."

Life as a deputy attorney general also keeps her grounded.

"My day job is probably good for my track and field because it's forced rest," Hanscom said. "If I didn't have a day job, I'd probably be out training or doing something all day long because I find it really fun. And I'd probably use myself up."

She began as a pro tem judge in the juvenile court system for seven years before joining the San Diego County district attorney's office, where she worked on combating welfare fraud and insurance fraud. She eventually started a legal and medical fraud task force in the DA's office.

Hanscom has spent the past eight years in the California attorney general's office, where she works for the Bureau of Medi-Cal Fraud and Elder Abuse, which prosecutes pharmaceutical companies, medical equipment companies and health care providers.

Her day job hasn't slowed her approach to the track. Hanscom works out on the track three days a week, fitting in some training during her lunch break, in addition to her daily gym workouts.

Her current favorite event is the 300-meter hurdles. In July, she won the national title in the event for the 60-64 age group with a time of 53.65 seconds, less than 2½ seconds off the world mark.

At the San Diego Senior Games on Sept. 21, she attempted to break the record. But first, she had to provide her own hurdles. Regulation hurdles for women competing in the 60-64 age group have unusual dimensions, and the track at Mesa College did not have the right ones.

Originally, she was going to buy a set of hurdles for $1,200, but instead ended up making the hurdle tops with her brother, buying the wood at Lowe's.

A stiff headwind hurt her race, and she fell short of the world record, finishing in 53.86, but still nearly six seconds ahead of her nearest competitor.

No matter how many victories she continues to pile up, she's still driven to compete.

"Now it's my identity," she said. "It's like anything — when you get good at something, you enjoy it more. But I can still find room for improvement."

Hanscom's success hasn't come without its share of setbacks.

On the first day of the World Championships in Sacramento in 2011, she ruptured her plantar fascia during an approach to the high jump. The injury put her on crutches for eight weeks, and it took her a year to mend.

Just as she was coming back in 2012, she broke an ankle while practicing the pole vault, setting her training back another year.

"Those were two really debilitating injuries, and I had my doubts about whether I would ever be able to come back and compete at the same level," she said, attributing her recovery to "patience, good physical therapy, and continuing to make demands on [myself]."

To see her compete now, you wouldn't know she'd been hurt. In March, Hanscom earned the silver medal in the pentathlon at the World Masters Indoor Championships in Budapest. At 59 years old, she was the oldest competitor in the 55-59 age group.

She followed that up with her domination at nationals in July, in a new age group. She turned 60 in May.

Now she turns her attention to the 300-meter hurdles world record for women 60-64.

"That 300-meter hurdle (record) would be a nice accomplishment for me — to be able to take an individual event and master it, because I haven't done that yet," she said. "And I don't know if I can."

No one's betting against her.