Two years ago, the area surrounded by biotech offices in Torrey Pines Science Park was a parking lot. Now, the lush green space is an oasis for employees, a nature classroom and a supplier for a campus restaurant.

Open to the public for enjoyment, Nautilus garden is a teaching tool for employees and visitors to learn the beauty of food, seasonal eating and organic farming.

“That’s why we’re in existence,” Karen Contreras said about her six-year-old company, Urban Plantations, which built, planted and maintains the garden, along with gardens at homes, businesses, restaurants and assisted-living residences in the region.

For property owner Alexandria Real Estate (NYSE: ARE), which leases about 3 million square feet to life-science tenants in San Diego, the Nautilus garden is key to collaboration, healthy employees and recruitment.

The last crops of summer are in, and fall crops are now aplenty: lettuce, arugula, bok choy, spinach, onions, beets, carrots, garlic and broccoli. Two kiwi vines grow along a fence, and passion fruit has filled in a wall.

Throughout the quarter-acre, where employees can kick a soccer ball on turf or read under an umbrella, you’ll find the common and the surprising: fig trees, orange trees, lavender, strawberries, Australian finger limes (crack it open to find lime “caviar”), kefir lime, lemongrass, fava beans, pomegranates, avocados and persimmons. In early October, Himrod grapes were producing their second crop of the year. 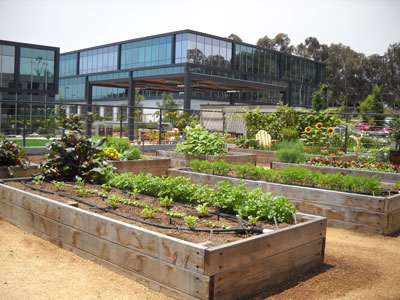 Raised garden beds populate the Nautilus garden in the Torrey Pines Science Park in an area that was once a parking lot. Photo courtesy of Urban Plantations

“This is crazy. I’ve never seen this happen before. Never,” Contreras said about the green grape clusters. “That’s what I love about my job, I’m always learning.”

Contreras has valued growing food since she was a child. Her family is from the Central Valley, and her grandmother was a gardener in downtown Los Angeles. After tasting a carrot she pulled from the ground herself at the age of 3, her unwavering dream was to have her own farm.

During her formative adult years, Contreras owned a farm in Oregon, producing about 95 percent of her food, including meat and dairy.

In San Diego, Contreras gardened as much as her yard allowed.

“I was just planting things where I could — a zucchini there, a tomato there, and I integrated it where I could,” said Contreras. Her “aha” moment came when a friend asked about the zucchini plant, assuming the vegetable grew underground.

That’s when Contreras decided to leave a six-figure sales executive position to combine her passion for farming with a landscaping-type job, not an easy decision as the recession began and her husband was laid off. During times of financial stress, she has turned to the land. She says planting things gives her ownership of the situation.

An article in the North Park News early on gave her young business — originally based in a spare bedroom — needed publicity. Her initial focus was on home gardens, teaching clients how to identify pests and disease, choose healthy plants and harvest them at their peak, and develop maintenance programs.

Many well-known clients have hired the team to install gardens, including Alexandria, Carnitas Snack Shack and the Urban Kitchen Group, which owns Cucina Urbana and Cucina Enoteca.

Celebrity chef Marcela Valladolid of The Food Network regularly posts photos on Instagram of the eight raised beds in her yard, along with fruit trees and an herb garden, built by Contreras’ team and Broyles Landscape.

Urban Plantations is prepping another large-scale corporate garden in the next few months.

Business has boomed, and Urban Plantations has recently grown out of a cramped studio apartment behind Contreras’ home.

The 10-person staff has moved to an office at 2335 University Ave. in North Park, in what used to be a lamp store. Urban Plantations is sharing the space with Mooch Exterior Design and North Park Nursery; Contreras said she hopes the companies will collaborate on future projects.

They’re trying to find answers to some of the most complex questions, like curing cancer and Alzheimer’s, and collaboration areas outside offices and labs can be critical.

“These are complicated problems and they need many minds — fresh, rested, stimulated minds — to work on them,” said Daniel J. Ryan, Alexandria executive vice president for Strategic Operations and San Diego regional director. “We’re trying to create environments where this can happen.”

The gardens at Alexandria’s San Diego properties have proved popular and rewarding, and give employees an opportunity for spontaneous interaction, Ryan said.

Three days a week, before the parking lots fill and business days get underway, Contreras and her employees start tending the raised beds and orchard areas at 6 a.m. Lately, rabbits have beaten them there, as the drought decreases their water and food supply. Contreras said she hopes new nets will deter the animals.

Urban Plantations harvests about three-quarters of a pound per square foot at the garden, or about 120 pounds per week. Being classified by the county as a culinary kitchen garden enables produce to be used in the Green Acres kitchen.

“It’s less about production than about educating people and creating a nurturing environment to be in,” Contreras said.

Brian Malarkey, owner of downtown's hip Searsucker, created the restaurant brand, which also has a location at Alexandria’s nearby 450,000-square-foot Campus Pointe complex, where Urban Plantations maintains its largest garden.

Good soil is the foundation of organic gardening, Contreras said while walking through the grid of raised beds, each no more than 4 feet across, which provides access from both sides while preventing the need to walk in the beds and compact the soil.

Urban Plantations built the boxes out of California redwood, and lined them with food-grade plastic. The beds should last for 15 years.

One bed costs about $600 or $700 to build and plant, Contreras said. A garden like the one at Nautilus could cost thousands of dollars for construction and maintenance.

Contreras said her goal isn’t to be the cheapest — Urban Plantations isn’t the “mow and blow” type — but to be the best.