The courtyard of the Headquarters at Seaport Village after the renovation. Photo courtesy of Heritage Architecture & Planning

For years after its 1987 decommissioning, the old San Diego Police Department headquarters on Harbor Drive sat as a historic piece of the city without a clear future.

Inmates housed in what had previously been a three-cellblock jail attached to the station were on the books — as were their colorful, if not pejorative by today's societal norms, descriptors attached to their mug shots.

But it wasn't until the recent project of Terramar Retail Centers, to not only open the space up for new uses but to also open the doors to a part of San Diego's past, that the public had its first real chance to explore what each side of the law-and-order spectrum experienced there as San Diego grew into a major city.

Terry Hall, general manager for Terramar at Seaport Village, said the Headquarters at Seaport District offers something few places can, with its insider looks at the historic jail.

"Other than going to Alcatraz, I don't think you get the opportunity to see that," she said. 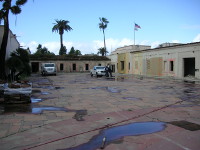 Included in the touring area — on the wall next to four inmate cells on the first floor of the retained cellblock — is a series of mid-20th-century mug shots with descriptions of the pictured individuals.

The notes mark a different time, with a less-stringent effort by law enforcement to watch how they described the jailed. One woman's description reads "weedhead." Those in for prostitution were not labeled as being convicted of the crime; they were merely given the tag of "prostitute." Many of the men and women were also described simply "peddlers" of some kind, often of drugs.

Originally, all that block's cells were open for touring, but thefts caused Terramar to limit the open-cell scope to just one, with other cells viewable only from outside their bars. In that open cell, visitors can feel and imagine what it was like in the closet-size space with two stacked bunks, a small sink, shelf and a toilet.

"I can't imagine sharing that with 'Bubba,'" Hall said jokingly. "It's pretty creepy."

A lot of interior demolition work went into transforming other wings of the headquarters into open spaces for retail or restaurant use.

Still, signs of the past were retained above, below and at the eye levels of today's visitors.

David Marshall, president of Heritage Architecture and Planning, which worked with the architect of record — Carrier Johnson + Culture — as the historical architect, said that by definition, an adaptive re-use project should make relevant an old building that might otherwise be demolished.

Heritage was also retained as a historical architect in the project that kept the Western Metal Supply Co. building within the Petco Park design in East Village, and is working now in the restoration of Horton Plaza as the larger project there to add an adjacent modern addition continues.

"This one was very unique, not only in that it had the offices that you'd expect, but it had a gymnasium; it had jail cells; it had courtrooms; it had repair garages," Marshall said.

The 1939-built property had sat empty since the police left in 1987, vandalized and in disrepair. That millions of dollars were being put into it to re-use it was a story itself, but Marshall said a triumph for history was achieved in that previously proposed plans to demolish all of the property — except a re-located but preserved tower — never came to pass. Such a plan had been proposed in the late 1990s, before the property received its status on the National Register of Historic Places.

"When Terramar got involved, they wanted to basically utilize the whole building, with the exception of one of the jail cellblocks, which was demolished to make an entry on the south side," Marshall explained. "That allowed it to connect to Seaport Village."

Heritage was initially brought into the mix of what would become the roughly $40 million adaptive re-use project in 1998, when previous architects of record had still considered the tower-only scenario. Terramar's newer vision began with demolition work starting in 2009 under Carrier Johnson's design.

Major restaurant tenants in the property now include Puesto, Eddie V's and Season 52.

"The Puesto … they left a lot of the rustic, and even unfinished elements of the old jail cellblock that they're in exposed, and they brought in a very contemporary, hip kind of dining establishment where it's kind of a half and half scenario," Marshall said.

While the contemporary glass windows to the restaurant open like tall French doors spanning two floors, Puesto’s interior retains switch plates in the wall from an older era. And half of one of the old cell block's stairways hangs from one back wall, abruptly ending halfway down from the second level to the first, mirroring the establishment's half-and-half mix of styles.

While much of Seasons 52 was designed with a modern touch in another wing, it did retain two of the large metal trusses that hung over the heads of police officers in the garage, as well as the high barreled ceiling.

"We were lucky in that there was almost a full set of original drawings that were in file at the (San Diego) History Center," Marshall said. Photographs were also used in the restoration, most of which came from the San Diego Police Historical Association.

"Drawings and photographs answer a lot of questions about how the building had been modified," he added. "And this one had had a lot of additions tacked onto it, and a lot of rooms had been gutted and redone."

There were also aspects missing from the original design that Heritage made sure were reconstructed. Had they not, the iconic fountain in the historic headquarters' courtyard wouldn't be back as it is now, and visitors might not see one of the few calming features that was originally a part of what was likely a far-from-calming place.