Since being named Scripps Health chief executive 14 years ago, Chris Van Gorder not only engineered a financial turnaround for the then-ailing company, but also helped build its reputation as one of the most employee-friendly businesses in the country.

The company has repeatedly been ranked as of the best places to work by such magazines as Fortune, Working Mother and AARP.

Van Gorder, whose career stretched from working as a hospital security officer to winning a gold medal for leadership from the American College of Healthcare Executives, says that for hospitals, as well as other businesses, strong employee relations and corporate success go hand in hand.

In Van Gorder's recently released book "The Front-Line Leader," the vast majority of recommendations center on how business executives should talk more with their employees, solicit their advice, encourage them to become advocates, give them more information and build loyalty from the middle.

"One thing I really advocate is taking care of your people so your people can take care of what they have to do," he said. "That means giving them a sense of security and giving them more authority and responsibility, but also holding them accountable for their actions.

"Responsibility, authority and accountability are the three-legged stool that provides the foundation of an organization. If one of those legs is missing, the organization will fail or be unable to deliver its services, and jobs will be lost,” he said. 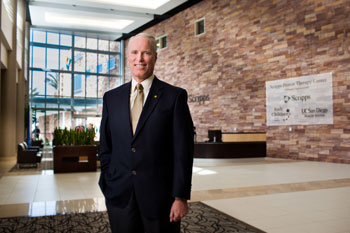 Unlike many corporate advice books that are either over laden with statistics or full of simplistic adages, Van Gorder's book is a relatively breezy read, full of personal anecdotes that bolster his suggestions for building strong relationships throughout an organization to help it thrive.

"Chris' experience, from the basement to the boardroom, provides an action plan that should be part of every executive’s commitment to those whom we ask to join us on the journey," he said.

Van Gorder began developing his views on hospital management almost four decades ago, when he spent nearly a year in and out of hospitals after a distraught woman rammed his police cruiser with her car.

In October 1978, Van Gorder was a police officer in Monterey Park, about 10 miles east of downtown Los Angeles, when he was called to aid in a clash between two parents over child custody.

When the police arrived, the mother grabbed her baby and tried to speed away in her car, with two police cars following close behind. Van Gorder took a side street to cut her off.

Cornered between the three cruisers, the woman revved her car and rammed Van Gorder's. She and the baby both survived the crash, but Van Gorder suffered serious damage to his neck and spine.

After more than a year of intensive traction, physical therapy and painkillers, it was still so painful to move that his department chief said he should either take a light-duty desk job or an early retirement.

Van Gorder tried retirement, but found that it made him so angry and depressed that he redoubled his attempts at physical therapy -- this time on his own -- and applied for a job as the director of the safety and security staff at Los Angeles Orthopaedic Hospital, the same place that had handled his therapy.

"Although I had some experience at security, I had never been a manager before, but I told them that if they'd just give me a chance, I'd be willing to work at minimum wage for 90 days, just to prove myself," he said.

Once he was hired, Van Gorder became so interested in management practices, he went back to school part time to earn an MBA specializing in hospital management at the University of Southern California. This helped him land executive positions at Anaheim Memorial Medical Center and Scripps Health, where he was hired as chief operating officer in 1999 and CEO just six months later.

At the time, Scripps had just reported $20 million in losses, with an employee turnover rate of close to 20 percent, resulting in a labor shortage that was pushing its costs higher.

Van Gorder streamlined its business operations; revamped the executive team to work in more of a co-management style; rebuilt relationships with physicians, who had been wary of the former management; and created more efficiency through breaking down the silos between departments.

These days, Van Gorder is bracing for a similar wave of changes as the health care sectors adapt to the federal Affordable Care Act as well as new technologies that are affecting a broad swath of industries.

"We're going through the most change we've ever seen in this industry," he said. "We're more regulated than we've been before and we're getting paid less to do more things. But the reality is that we have to change.

“If we'd kept going on the track that we'd been going on, with health care costs rising so much faster than inflation, sooner or later it could have bankrupted the country. The only way to survive is to rebuild what I'd argue has long been a very broken system."

Van Gorder predicts that in the not-too-distant future, the U.S. health care system will no longer revolve around big-box hospitals with hundreds of beds, but will instead rely more on smaller clinics and at-home care, assisted by wireless technology.

The emphasis, he said, will be more on keeping people well instead of just taking care of them when they get sick.

"One of the things that health care has never been good at is taking risks, which is understandable, since when you're dealing with people's lives you don't want to take a lot of risks," he said last week at a luncheon address to the North County Chamber of Commerce.

But he added that if health care organizations are going to survive the next wave of change, they will have to learn to take more risks — and even be willing to take acceptable failures — to move to the next stage of development.

And that's true for businesses on the whole, he said.