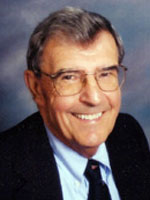 Beyster founded SAIC in La Jolla in 1969 as a scientific consulting firm, landing contracts with government agencies for nuclear power and nuclear weapons-effects study programs. He served as its CEO for 34 years until he stepped down in late 2003 at age 79.

The employee-owned company went public in 2006 and moved to the Washington, D.C., area in 2009. The company has since split into two firms, Leidos Inc. (NYSE: LDOS) and SAIC Inc.

Before SAIC, Beyster was chairman of the accelerator physics department at General Atomics. There, he set up and managed a government and private research laboratory focused on the 100-million-volt traveling wave linear accelerator.

In the 1950s, he was a physicist at Los Alamos National Scientific Laboratory, conducting research on a water boiler reactor and a large Van De Graaf accelerator, according to his biography. Before that, he was a senior scientist in the atomic power division of Westinghouse.

Beyster has been lauded often by the San Diego business community, receiving, among other honors, the San Diego Regional Chamber of Commerce's Spirit of San Diego award in 2001; the 1999 lifetime achievement in corporate governance award from the Corporate Directors Forum; a lifetime achievement award from the UCSD Connect Program in Technology and Entrepreneurship in 1994; and was endowed a chairman in engineering at the University of California, San Diego.