Growth of legal incubator movement on display at conference

Editor's note: This is the first in a series of stories about the recent international legal incubator conference in San Diego.

When proponents of legal incubators held seminars several years ago about their efforts to address the unmet legal needs of the public, they say they were thrilled to draw anywhere from a half-dozen to a dozen people.

This past weekend, 160 people gathered at California Western School of Law for the second annual international conference on legal incubators and residencies, a 33 percent increase in attendance over the first gathering last spring.

Incubator pioneers said the large turnout and excitement among attendees demonstrates the state of the movement — which has seen an increase in the past three years from a handful to at least three dozen incubators worldwide — is as strong as it has ever been.

Fred Rooney, who founded the first incubator in New York eight years ago and oversaw the launch of the first international one in the Dominican Republic in 2013, said he expects the momentum to continue, especially with additional projects funded or on the drawing board.

“We have the energy. We have the drive," said Rooney, of Touro Law Center in New York. "We have the ambition to push our institutions to be able do more and to be able to serve the millions of the people in this country who don’t even have a prayer of ever seeing a lawyer.”

Directors of incubators, law school leaders, bar association representatives, judges and attorneys were among those attending the event. 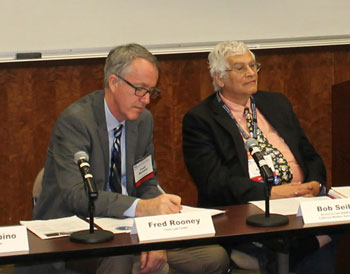 They traveled from across the country, as well as the Caribbean and Eastern Europe.

Bob Seibel, director of California Western’s incubator program, the Access to Law Initiative, said the broad mix of attendees, including many with hopes of starting incubators, was another testament to the vitality of the movement.

He also said the increased interest should provide a boost to the efforts to reduce the so-called “access to justice gap"; some studies estimate that more than 80 percent of the essential legal needs of low-income people in the U.S. go unmet.

“It tells us the appeal of this idea is really much broader than the typical law-school-generated idea,” Seibel said. “That’s important because the problem is big and it needs the support of a lot of different resources.” 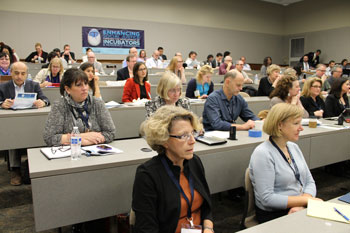 Incubators typically provide shared office space for solo practitioners or small-firm lawyers, along with the training and mentorship to help new attorneys build sustainable practices serving those of modest means.

One of the main goals of the conference was for individuals from institutions overseeing incubators to share their experiences and lessons learned, while encouraging others to launch new ones.

Two of the programs highlighted were the Access to Law Initiative and Thomas Jefferson School of Law’s Center for Solo Practitioners in San Diego, the first city with two incubators.

Attendees were given tours of the Thomas Jefferson site and one of two Access to Law locations downtown, which features beautiful views of the city and the bay from high up in the Symphony Towers. They also heard from the leaders of the programs, both of which launched in 2012, about their success.

“I hope San Diego will continue to innovate so we can take what we have already done and build on it to come up with even better and more useful ideas,” said Lilys McCoy, director of the Center for Solo Practitioners.

Alaska Magistrate Judge Suzanne Cole and Alaska Pacific University professor Mara Kimmel, both of Anchorage, were among those eager to launch an incubator.

They said they hope to start a program with lawyers providing affordable legal services to victims of domestic violence and Alaska’s native people. Kimmel said the conference boosted their resolve to move ahead.

“We are the only the state in the country without a law school,” said Kimmel, also a board member at the Alaska Institute for Justice. “I think now I understand that is not as big an obstacle as I thought it was.”

Layke Martin, assistant dean for external relations at the University of Nevada, Las Vegas’ William S. Boyd School of Law, said her school hopes to open an incubator next year.

Martin said the conference showed her that incubators can not only train lawyers to provide affordable legal services, but also be a place where law graduates test out new or niche practice areas.

“There were so many people doing exactly what we want to do and who were willing to share their experience, their information, their tools and their budgets — all the stuff you need to get one of these up and running,” Martin said. “That was tremendously helpful.”

Bill Adams, a partner at Norton Moore & Adams in San Diego, is the co-founder of a local group called the Public Interest Advocacy Clinic, which has as one of its goals training law students and attorneys how to advocate in the public interest.

He said he came to the conference to get a better sense of whether his group, which also plans to bring public-interest litigation, should establish itself as a formal nonprofit.

“Now I feel like it is viable and there is a whole community out there that has been doing the same thing,” Adams said.

The annual conferences are expected to continue, with another key figure in the movement, University of Missouri-Kansas City School of Law Professor Tony Luppino, offering to host at his school next year.

But top leaders also proposed establishing a formal consortium for incubator programs that could provide a more frequent dialogue and a way to secure more funding.

The feedback to the idea crafted by Rooney, Seibel and Luppino was largely positive. They will incorporate it and move forward with a more formal proposal.

"As the movement has grown in ways we would never have imagined, the need to try to coordinate efforts all over the country has become even greater," said Rooney, director of the International Justice Center for Post-Graduate Development at Touro Law Center. "That’s why the development of a consortium is so important."