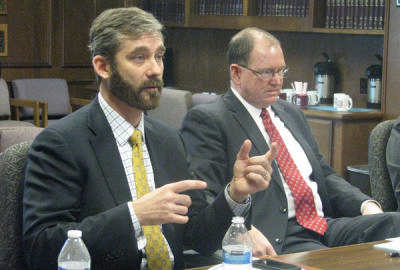 The Internet of Things promises to bring enormous opportunities to the security and defense fields, but serious risks accompany every benefit as increasing the available tools also increases the threat.

The Department of Homeland Security and the U.S. Navy are working to take advantage of new technology, but in an environment where existing systems can’t always communicate with each other, and where human capital is still the key component to any mission.

“Now the Department of Homeland Security is charged with cybersecurity. We’re scratching our heads with this. Where’s the funding?”

Garcia said the infrastructure to deal with cyberthreats, along with personnel and training, all need attention — and money.

“Our senior leadership across the board feels that [cybersecurity] is where our greatest vulnerability happens to be for this country,” Garcia said.

“It’s going to be very interesting to see how we are able to develop all that we need to do to really promote a robust plan on how we’re going to protect the infrastructure of the country through cybersecurity. … It’s really a daunting task — we’re going to have to have a lot of collaboration with private industry on that.”

No one disputed the task will be daunting, but many roundtable participants also pointed out the benefits of the Internet of Things, and the benefits of ensuring existing communications systems are interoperable.

Ralph Wade, vice president for digital solutions and C4ISR at Booz Allen Hamilton, said harnessing the capability of the IoT for defense will lead to improved efficiency.

“Kill chains or mission threats can be much more effective operationally,” Wade said. “You can get reduced time frames really quickly. I see a huge capability there in trying to get that — and the technology exists.”

One problem facing the existing technology and future IoT devices is starting out by making integration on a device, department and organizational level, as opposed to what Greg Wenzel, executive vice president and lead for digital solutions and C4ISR at Booz Allen, calls “integration after the fact.”

“We buy these things in stovepipes and then we know we need to connect to the left and right of us to get part of the picture,” Wenzel said.

Creating standards is one of the keys to getting to a point where the user, say a sailor or officer from U.S. Customs and Border Protection, can plug in to one device and get the whole information picture, rather than having to connect to five different systems, each for one piece of the puzzle.

Ruth Youngs Lew, executive director of the Navy's Program Executive Office for Command, Control, Communications, Computers, and Intelligence (PEO C4I), said this is one area on which the Navy has focused over the last decade, with progress to show for it.

The Navy has moved to a common computing environment through its Consolidated Afloat Networks and Enterprise services, or CANES, with applications riding on top of that universal system to facilitate easier upgrades, and now does thorough integration testing on new systems to ensure that ships, planes and sailors can communicate with one another and systems onboard.

The next step, Youngs Lew said, is using the cloud to harness the power of all the data produced by the systems and sensors.

“The next step really is big data analytics, and we’re bringing in some of the industry expertise to help with that, as well as the Office of Naval Research,” she said.

Tom “Rodger” Schneidau, executive officer for the San Diego sector of border patrol for Customs and Border Protection, said technological solutions are necessary and important, but it all comes down to people and relationships facilitating information sharing.

“The human capital side is leadership understanding that they may be administratively stovepipe, but operationally they’re actually combined, and then developing relationships which sometimes take a great deal of effort and time,” Schneidau said.

He said he has agents assigned to Garcia with U.S. Immigration and Customs Enforcement and vice versa, which allows collaborations such as the Regional Coordinating Mechanism, formally known as the Maritime Unified Command, to work.

The RECOM involves a host of parties, including ICE, the Border Patrol office of Air and Marine Operations, the Coast Guard and San Diego Harbor Patrol.

“Back in 2008, we saw that we hardened the border to where it was getting more and more difficult for transnational criminal organizations to move their cargo, whether human or drugs, so they started to move out to the ocean,” said Ralph DeSio, public affairs specialist for the Office of Customs and Border Protection.

“And back in 2008 they recognized that that was going to be a challenge because of the hardening of the port, so we established a Maritime Unified Command … to share information and have that one goal of getting bad guys and gals in the maritime domain and stopping the threat.”

Garcia agreed that this culture of embedding people from different departments to accomplish similar missions is necessary, but also highlighted Youngs Lew’s point about improving software updates through applications layered on one universal hardware system.

“Technology comes to be obsolete so quickly that that is our biggest issue,” Garcia said. “Every time I need to refresh, it is just such a huge part of my budget. So we’re unable to keep up and that’s the bad part.”

Again, these technological updates and advancements bring great benefits to those working on security missions, but each opens a Pandora’s box of separate security concerns. As important as harnessing the power of data is to the Navy, protecting it is equally vital and challenging.

“This whole Internet of Everything — where are we going with protecting the data, what kind of data needs to be protected?” Youngs Lew asked.

“And it brings in and poses a whole new challenge that we’re looking to address. We’ve got plans laid in and we’ve got a lot of things that we’re going to be doing and we’re already currently doing right now and planning over the next few years to put protections in place, but it’s definitely a huge challenge facing all of us.”