By Dean Calbreath, The Daily Transcript
Wednesday, May 13, 2015

On the Depot Springs Beer Co.'s website, there's an electronic clock ticking down the days, hours, minutes and seconds until the scheduled opening of its brewery in La Mesa.

The clock, which previously forecast that Depot Springs will open in early August, has been stalled over the past week or so, wavering back and forth with a projection that doesn't dip below 87 days.

Developer Aaron Dean says that because of some hiccups -- including a temporary funding glitch when one major investor pulled out and others came in -- the $5 million project probably won't start rising from the ground until early July and won't open until December.

But maybe such delays are to be expected, since Dean has never envisioned Depot Springs as being a mere brewery.

Instead, his goal is to create a beer-centered food and entertainment complex, including a farm-to-fork restaurant, coffee house, bakery, mini-arcade and outdoor stage and amphitheater. 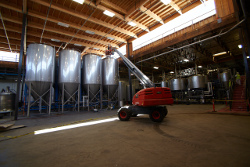 AleSmith is expanding into a 105,000-square-foot brewery at 9990 Empire Street, just two blocks west of its current facility. Expected to open this summer, it will feature a new tasting bar and brew system with the capability to pump out more than 100,000 barrels a year. Photo courtesy of AleSmith Brewing Company

While kids plunk free tokens into the pinball machines and vintage arcade games ("No shoot-’em-ups," Dean emphasizes), their parents will have the chance to relax on the grassy lawn that rims the amphitheater -- or taste craft beers at a bar beneath the stage, next to a subterranean aging room for 15 barrels of specialty brews.

"We've put an incredible team together and decided do something that hasn't been done in San Diego before," Dean said. "Some people think it's strange to say you want to have a kid-friendly brewery, but that's really what we want to be. As a father of two kids, 10 and 13, I really want it to be geared to the family, so if the kids want to play a game or run around on the lawn while Mom and Dad are enjoying a beer, they'll be able to."

Although Dean's particular idea may be unique, his brewery is part of an ongoing trend. So far this year, at least 11 new or expanded craft breweries have opened in San Diego, compared with 14 breweries during all of 2014.

Since 2011, the total number of breweries in the county has risen from 37 to at least 105. And a dozen other brewery projects are in the wings, ranging from new launches to expansions of existing operations.

On Saturday, for instance, Mira Mesa's Green Flash Brewing Co. plans to open a 12,000-square-foot facility in an industrial park in Poway, including 2,500 square feet for a beer garden and tasting room with space for up to 155 guests. Green Flash, which is already one of the nation's top 50 craft breweries, plans to use the site for experimenting with yeasts and barrel-aging.

Within the next few weeks, AleSmith Brewing Co. plans to move from its 20,000-square-foot brewery, tasting room and production center in Miramar to a 105,000-square-foot space two blocks away. The old site, meanwhile, will become the home of Mikkeller, a joint venture between AleSmith and Danish "gypsy brewer" Mikkel Borg Bjergso, who travels the world experimenting with new beer blends. 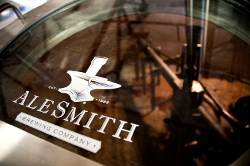 Other impending openings and expansions include:

+ Vigilante Brewing, planning to open a 4,500-square-foot brewery and restaurant and 2,000-square-foot patio near the Del Mar Fairgrounds by August, taking over a former pottery factory overlooking the San Dieguito River.

+ Belching Beaver Brewery, planning to open a brewpub in a former bank building in downtown Vista this summer, not far from its existing production facility. It has also inked a deal to buy a 24,458-square-foot former machine shop in Oceanside, where it plans to build a 30-barrel production facility, more than doubling its current capacity.

+ By next February, North Park Beer Co. hopes to open an 8,600-square-foot brewery and restaurant at a former martial arts gym on University Avenue near 30th Street. The space includes a 1,700-square-foot mezzanine for dining and a 1,500-square-foot, 15-barrel beer cellar.

Other likely launches include Reckless Brewing in Mira Mesa, which has already assembled its cold room and brewing system as a successor to Wet N' Reckless Brewing, destroyed by fire last year; Magnetic Brewing in Kearny Mesa, awaiting clearance from state alcohol regulators; Midnight Jack, finalizing a lease in Oceanside; and Second Chance Beer Co., planning to open a brewery and restaurant in Carmel Mountain Ranch after raising $1.6 million in a private placements with 18 investors.

Will the rapid proliferation of suds makers saturate the local market? The brewers aren't worried.

“Since the beer trade is somewhat decentralized, it seems like there can be larger numbers [of breweries]," said Jim Crute, head brewer at Lightning Brewery in Poway.

Crute said he sees no reason why the market couldn't at least double in size to 200 or so breweries.

T. Dustin Hauck, an architect who has designed a number of local breweries, said that as long as multinational breweries dominate the market, there's room for more small breweries to enter. "When the craft beer market reaches equal distribution with Budweiser, that would be saturation," he said.

To differentiate themselves, some brewers are seeking to broaden their appeal by offering amenities other than just food and beer.

Vigilante Brewing's plans in Del Mar, for instance, include a 2,000-square-foot patio where customers can play ping pong and bocce ball or converse around fire pits. The Stone Brewing World Bistro & Gardens in Escondido includes a garden with park benches, a winding stream and ponds.

And then there's Depot Springs, with its outdoor amphitheater and lawn that can accommodate up to 600 people, said Dean, who intends to run the stage as a not-for-profit operation providing a venue for local musicians.

"As the craft brewing matures, brewers are going to seek new ways of bringing people in," said Vince Vasquez, an analyst with National University's Institute for Policy Research who has studied the beer industry. "It's not just going to be a bunch of beer geeks sitting at a bar debating over which beer tastes better."