From small sailboats to Navy ships returning from deployment, San Diego Bay is filled with activity every day. And with the waterfront's iconic Coronado Bridge and USS Midway Museum, it's easy to acknowledge San Diego as a beautiful port.

However, one local company is looking a bit deeper.

Orca Maritime, established in 2006 by two retired Navy explosive ordnance disposal experts, is based out of a small office off the coast of Imperial Beach.

Dramatic black-and-white photographs on the walls by Orca's underwater photographer, Chad Nelson, show employees diving on assignment for the company. These shots give only a glimpse of the company’s breakthrough technology and maneuvers used daily.

The data layers collected from running the equipment through the water help clients understand what lies beneath the surface — critical information that could show unexploded ordnance or large pieces of debris posing a risk for dredging machinery. 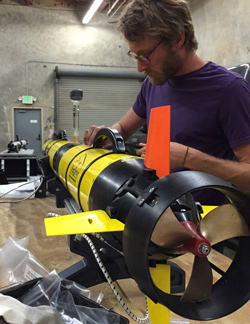 The company’s clients range from water treatment plants looking to explore their underwater piping to the Geneva International Centre for Humanitarian Demining.

An upcoming project is in Tarawa, a central Pacific atoll that was the site of an important World War II battle in 1943.

While working for GICHD, Orca will use its technology to scan and map the area, looking for obstacles to the successful dredging of the atoll.

"There is a lot of unexploded ordnance out there, so we’re going to go out and do some mapping to help to mitigate the hazards to dredging operations, because they sell sand for the island nations out there," said Kurt Nelson, CEO of Orca Maritime. "They sell sand for paving roads and things like that, so it's kind of an economic deal."

Searching for ordnance isn't a new concept for the company. San Diego Bay contains 50 dumping sites where ordnance was discarded after World War II. Nelson said the unfortunate "out of sight, out of mind" mentality is still why companies dump in oceans all over the world.

"We've done some ordnance remediation surveys here in the bay and outside the bay at 50 historical ordnance dump sites," Nelson said. "They used to just dump ordnance in the water way back when, so we went and did the surveys for NAVFAC [Naval Facilities Engineering Command]." 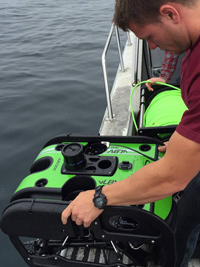 During their years in the Navy, Nelson and his Orca co-founder, Anthony Rodgers, were the first ones to put an AUV into combat.

"The Navy had AUVs in experimental roles and they were developing the technology, but this was the first time it was actually applied in a combat scenario and it functioned great, so we thought, 'Hey, this is new, it's cool, and maybe we can do this back home,'" Nelson said.

After retirement it was back to the water, where they took the knowledge and skills acquired from their military background and began a small operation armed with cellphones and laptops, and a lot of time logged at a local coffee shop, Nelson said.

They performed consulting work and started to generate revenue. Then they bought some equipment, took out a small-business loan, “put our heads down and moved forward," he said.

A couple of years later, the business, although with only nine employees, could give great assistance and insight during disaster recovery efforts in the bay.

"Say there's a big earthquake and you’ve got this infrastructure running across the bottom of the bay out there — sewer lines, power cables, water lines," Nelson said, "If one of those breaks, what ecological disaster is going to happen?"

Nelson says in the case of a natural disaster or terrorist attack, it's vital to know what's at the bottom of the bay. As a sunken ship settles to the bottom or pipes are broken, it's essential that the first responders or the Port Authority know where to shut things off to mitigate damage.

If other large ports in the nation were to get blocked or ruined, it could mean a huge economic and environmental problem if steps aren’t taken to know what's at the bottom of those ports before something disastrous happens.

The information being collected by Orca could lessen or even prevent the damage caused by a natural disaster or terrorist attack. Nelson sees this as a good investment for the ports around the country.

"When you look at the greater scheme of things and the amount of money that would be lost, it's a pretty cheap insurance policy, but, unfortunately, people are reactive,” Nelson said. “They wait for something catastrophic to happen before they put these safe guards in place or these mitigation techniques in place."

The possibility of mapping all the U.S. ports is possible because of Orca's size and portability.

Unlike large companies that perform deep-sea mapping (such as the company that searched for Malaysia Airlines Flight 370), Orca is smaller and has equipment that can be loaded onto planes and taken to survey sites in the back of a truck.

"By us reducing our footprint and reducing our logistics requirements, the costs come down and we can move much faster." Nelson said. "What would normally take a company to move to a site maybe a month, we can do it in just a couple of days."

A few years and one office renovation later, Orca continues to build an impressive client list and is taking its services all over the world. Orca plans to establish an office in the Middle East this year.